It is an understatement to say that coach Jeff Scott’s South Florida Bulls have had a tough season. But for the most part, they have hung around in most games including Saturday’s 54-42 game against No. 20 Houston at Raymond James Stadium.

But before most Bulls fans were in their seats freshman Brian Battie took the opening kickoff at the goal line and raced 100-yards for a touchdown. He would go on to tie an NCAA record by doing it again in the second quarter, this time racing by Cougars to give USF a 28-26 halftime lead. He joined Utah’s Reggie Dunn as the only two players to post a pair of 100-yard returns in the same game, Dunn doing it vs California in 2012.

For Battie, it was the third time this season he has taken a kickoff 100-yards for a Bulls touchdown, all occurring in the last four games, as he became the first USF player to post multiple 100-yard returns on their career and set USF season and career touchdown return record with three. Saturday was a dream night as he led South Florida with three touchdowns, also posting a 29-yard touchdown run, and 236 all-purpose yards.

Coach Scott was impressed with his effort “We haven’t been able to break through, but we did a lot of really good things. There’s a lot of things to look at. Brian Battie had two kickoff returns for touchdowns. I think that tied an NCAA record with two 100-yard kickoff returns.”

Battie is just one of the many talented young players that Scott has recruited to South Florida this week things do not get easier as the No. 2 ranked Cincinnati Bearcats in a nationally televised game Friday night at 6 pm at Raymond James Stadium. 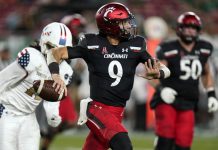