Big 12 schools agreed Monday night to play one nonconference football game this year to go along with their nine league contests as plans for the pandemic-altered 2020 season continued to fall into place.

A source with knowledge of the situation told Horns247’s Chip Brown based on the league’s decision to move to the plus-one schedule that UTEP is expected to be the non-conference opponent for the Longhorns. While the game scheduled to take place on Sept. 19 at Royal-Texas Memorial Stadium would fall in line with the Big 12’s new guidelines that the non-conference game is a home contest for the league member, no firm start date has been set for when the conference will begin the season.

“The start of (Big 12) Conference play will be solidified in the coming weeks, with an anticipated start sometime between mid- to late-September, with the expectation that non-conference games are contested prior to beginning league games,” said the league in a statement released Monday night accompanying the official announcement of the new scheduling model.

That means the South Florida Bulls are looking toward finding a replacement for Texas. What will be a huge loss is the money because South Florida will miss out on a huge paycheck for the game in Austin.

Meanwhile, the Big 12′s university presidents signed off on a 10-game schedule, adjusted to deal with potential disruptions from COVID-19 that lets schools play one nonconference opponent at home. A specific start date for conference play was not determined. The conference said in a news release it will likely begin mid-to-late September and the expectation is nonconference games will be completed before league play starts.

“We believe this change provides the best opportunity going forward,” Commissioner Bob Bowlsby said in a statement. “However, we will undoubtedly need to be flexible as we progress through the season in order to combat the challenges that lie ahead.”

The Big 12 championship game at AT&T Stadium in Arlington, Texas, is scheduled for Dec. 5, but could be moved back to Dec. 12 or 19, the league announced. Dec. 19 could pose a scheduling conflict with high school football championships at the Dallas Cowboys’ stadium and force the Big 12 to relocate.

The 10-team Big 12 already plays a nine-game, round-robin conference schedule. Unlike other Power Five conference that have switched to either exclusively (Big Ten, Pac-12 and SEC) or mostly (ACC) league games, the Big 12 could not add more conference games without teams playing each other more than once.

Several Big 12 teams have already started preseason practice, with Kansas and Oklahoma slated to play FCS teams on Aug. 29. Whether those games remain on that date is unclear.

As conferences take steps toward a football season that seems to be in precarious shape because of the pandemic, the NCAA is expected to weigh in Tuesday on fall sports other than major-college football.

The association’s Board of Governors is scheduled to meet and whether to cancel or postpone NCAA championship events in fall sports such as soccer, volleyball and lower-level football is expected to be a topic.

Less than two weeks ago, conference commissioners across Division I encouraged the the board to delay any decision on fall championships. The NCAA does not control regular season competition in any sport — and it has no say at all in major college football — but canceling or postponing fall events could send a conflicting message as member schools try to move forward with a fall season, despite concerns about the number of COVID-19 cases around much of the country.

The Power Five conferences have billions in television revenue at stake in their ability to stage a football season, and they have decided independently the best way forward is to focus on conference play.

Though there are still plenty of details to work out.

Only the Pac-12 has a full football schedule with matchups and dates in place among Power Five conferences. The Pac-12 will begin Sept. 26, along with the Southeastern Conference, which is still working on its new 10-game slate.

The Atlantic Coast Conference has opponents set for its 10-game conference schedule and will start the weekend of Sept. 12, but no specific game dates are set. The ACC has also said it will permit its teams to play one nonconference game in its home state.

The Big Ten, first to announce intentions to go conference-only this season, has yet to release a new schedule, but that could come later this week.

Now that the Power Five has declared its intentions the Group of Five conferences can start making plans and filling holes on their schedules — maybe with Big 12 or ACC teams.

American Athletic Conference Commissioner Mike Aresco has said the AAC could stick with its eight-game conference schedule and let its members plays as many of their four nonconference games as they can salvage or replace.

Early Monday, Texas State from the Sun Belt announced it was moving a nonconference game against SMU up from Sept. 5 to Aug. 29.

The Rose Bowl Will Be Played In Texas On Friday 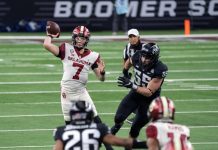 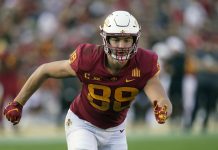