The NCAA tournament is always a great time of the season. Nobody ever truly knows what is going to happen, but this year has been even more crazy. The underdogs went 3-1 yesterday, with 11th seeded Loyola beating 7th seeded Nevada, 9th seeded Kansas State beating 5th seeded Kentucky, and 9th seeded Florida State upending 4th seeded Gonzaga. 3rd seeded Michigan was the only favorite to win beating 10th seeded Texas A&M. There are a few more predictable, better seeded teams facing each other on Friday, but it should still bring us just as much madness that Thursday brought us.

Clemson: The Tigers beat upset minded New Mexico State 79-68 in the first round before torching Auburn in the 2nd round to the tune of 84-53.

Kansas: The Jayhawks were not the first #1 seed to ever lose to a 16 beating Penn 76-60 before holding off the pesky Seton Hall Pirates 83-79

Guard Play. We have learned through the years that guard play wins and March, and these two teams are the epitome of guard play. Kansas is lead by Devonte Graham and Malik Newman, while Clemson is controlled by Marcquise Reed, Gabe DeVoe, and Shelton Mitchell. Whichever group of guards plays better and can take control of this game, could be the team that comes out on top.

Svi Mykhailiuk. Graham and Newman have been the leaders of this Jayhawks team for the past couple months, but when Svi is hitting shots this team goes to a new level. A 45% three point shooter could be the different down the stretch if he is hitting shots and is able to make this tough, hard-nosed Clemson defense defend him at the three point line.

Kansas 74-67. Many people thought Clemson was primed for a first round upset after they lost then top scorer Donte Grantham, but they have rallied for two huge wins, but the road ends here as Devonte Graham leads Kansas back to the elite eight.

Villanova 85-78. West Virginia will turn Villanova over, but the Wildcats have enough ball handlers to limit the turnovers and should get open threes after breaking the press.

Syracuse: The Orange won their first four game over Arizona State 60-56, then upset 6th seeded TCU 57-52, and then beat one of the tournament favorites and 3rd seeded Michigan State 55-53.

Zone Defense. If you enjoy man to man defense, then this is not the game for you, but if you enjoy zone defense and three point shooting then you will enjoy this game. Both of these teams play zone defense the whole game and both teams should be taking their fair share of three point shots. If both teams are on this game could get high scoring, but both teams are long and athletic and scoring could be tough to come by.

Gary Trent Jr. Gary Trent is the best all around shooter on the Blue Devils offense and Duke will need him to knock down shots against the Syracuse zone. If Trent can get hot from the outside, it will open up the paint area even more for Marvin Bagley.

Duke 68-61. The Syracuse zone will have the ability to keep the game close, but Duke has too many shooters and they have Bagley on the inside who should eat up offensive rebounds on the inside.

Texas Tech: The Red Raiders got past 14th seeded and tough Stephen F. Austin 70-60 before holding off 6th seeded Florida 69-66.

Haarms vs. Athleticism. Losing Isaac Haas would have been a bigger lose for Purdue if they didn’t have Haarms, but he will be tested in this game. Texas Tech isn’t abnormally tall, as they don’t have one player who averages more than 5 rebounds a game, but they have athleticism down low that could be a problem for Purdue. Texas Tech has two 6-5 guard/forwards combos in Zhaire Smith and Jarrett Culver who can jump out of the building. Neither of them will wow you with their shooting, but they will be a handful for Purdue in the paint and could lead to problems for the Boilermakers.

Dakota Mathias. Mathias averaged just over 12 ppg during the regular season, but has not been a huge factor so far in the NCAA tournament. Purdue may need him to hit some threes in this game if they are going to advance. Playing shorthanded, Purdue will need other to step up, and Mathias is a clear threat from anywhere on the court. Purdue may need Mathias to have his best game of the season in order to beat Texas Tech.

Texas Tech 78-73. The Red Raiders have the guard play of Culver, Smith, and Evans to get past Haas-less Purdue. Keenan Evans is playing on another level, even on a broken toe, and nobody can slow him down right now.

No. 1 Clemson ready to begin another title run in a very unconventional season. 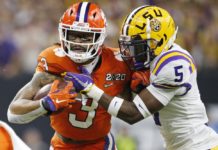 Sports and COVID 19: LSU trio heads the list of players opting out of this season