Different opponent for No. 14 Coastal Carolina. Even bigger stakes in this Top 25 matchup between the Chanticleers and No. 8 BYU.

“We have a great mindset,” Coastal Carolina coach Jamey Chadwell said. “We’ll play whoever, wherever.”

The Chanticleers’ ability to adjust on the fly will be tested as they get ready for the biggest game in their 18 seasons of mostly FCS football.

They had been preparing to play the Flames, Coastal’s one-time bitter FCS rival when both competed in the Big South Conference. But Liberty paused all its football activities and called off its game on Thursday due to the coronavirus.

BYU was there waiting — and ready, willing an able to travel 2,208 miles to Conway, South Carolina, for the chance to play.

The move heightens the big-game atmosphere that has been building at Coastal. ESPN’s College GameDay is hosting its show from campus when there were clearly other options, like Baton Rouge, Louisiana, where LSU will host No. 1 Alabama.

BYU offensive lineman James Empey has tracked Coastal Carolina this season since there are many similarities between the schools — mostly that both are Power Five outsiders looking to continue stellar seasons.

“It’s hard not hear about those guys, they’re making so much noise this season,” Empey said.

BYU is an FBS independent, scrounging to find any game it can in this COVID-19 affected season. The Cougars have won at Houston and at then-No. 21 Boise State last month, but are looking for a signature win. They’ve been having success with a high-flying offense led by quarterback Zach Wilson, who directs the country’s fourth-best scoring attack.

Coastal Carolina is also having a breakthrough season in the Sun Belt Conference. An FCS powerhouse just four years ago, the Chants were picked last in the East Division yet have clinched a spot in the title game and will host No. 20 Louisiana-Lafayette on Dec. 19 to the league crown. Should the Chants keep winning, they’d be in perfect position for the Group of Five spot among the prestigious New Year’s Six bowl game should No. 7 Cincinnati falter.

Chadwell said his staff and players started game-planning when the rumors of Liberty’s situation began Wednesday. Now, he’s looking for any edge over the Cougars he can get.

Some other things to watch for when No. 8 BYU travels to No. 14 Coastal Carolina:

This is the first meeting between BYU and Coastal Carolina, which spent its first 14 seasons as an FCS school before moving up to college football’s top level. It might not be the last as BYU athletic director Tom Holmoe asked Coastal counterpart Matt Hogue if the Chants would travel to Provo, Utah, for a game in the future. Hogue said they would and the two agreed to finalize things after the season.

The game will feature a pair of outstanding quarterbacks in BYU junior Zach Wilson and Coastal Carolina freshman Grayson McCall. Wilson has thrown for 2,724 yards with 26 touchdowns against only two interceptions. He’s also run for eight TDs. McCall is just as efficient and protective of the football with 20 touchdowns and just one pick.

BYU’s Holmoe also got a call from Liberty AD Ian McCaw wishing the Cougars good luck at Coastal Carolina. Holmoe said the call was part of the easy process of putting the game together under difficult situations. Then again, he might have made it because Liberty is a former bitter rival of the Chants from their FCS days.

The Chants defensive unit tops the Sun Belt Conference in fewest yards allowed this season with end Tarron Jackson leading the way. Jackson, who has been name the Sun Belt defensive player of the week three times, has 8.5 sacks and 12.5 tackles for loss. 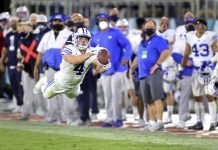 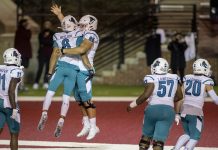 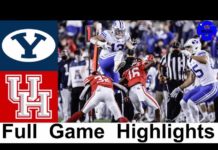