Kansas State coach Chris Klieman says he was never worried the Big 12 would disband or become irrelevant, even with the lingering questions about the conference’s future when Oklahoma and Texas head to the Southeastern Conference.

“I knew none of that was true,” Klieman said.

The Big 12′s swift response to expand with the additions of BYU, UCF, Cincinnati and Houston certainly helped answer a lot of those questions and created some stability moving forward for the league that some didn’t think would survive the departures of its only football national champions.

“We got four really good programs. … I think it solidifies the Big 12 is as a power conference that’s here to stay for the long haul,” Klieman said Monday during the first Big 12 coaches’ teleconference of the season.

“Well, we hit a home run, the presidents, ADs, Big 12 office, whoever was involved in this. There couldn’t be a better scenario,” Oklahoma State coach Mike Gundy. “We kept the Big 12 status. I always felt like that we needed more than 10 teams. Now we’re back to 12, we are the Big 12. And I couldn’t be any more pleased with the direction that it’s gone over the last week.”

The Big 12 has as many of its future schools ranked in the Top 25 as it does current members, with two each. Oklahoma is third, and Cincinnati eighth. Iowa State dropped out of the top 10 to 14th after losing to Iowa and BYU is No. 23.

Only six weeks after Oklahoma and Texas accepted invitations to join the SEC by 2025, the Big 12 added four schools that will join its league before then. BYU, now playing as an independent in football, will start Big 12 play for the 2023 football season, with the three American Athletic Conference schools coming in no later than 2024.

After getting their Big 12 invitations on Friday, the four future foes all won Saturday. BYU beat Utah for its first victory against its instate rival in nine tries since 2009, and the other three had lopsided wins.

Oklahoma and Texas, which fell out of the Top 25 after a 40-21 loss at future SEC foe Arkansas, have said they will honor their current contracts with the Big 12 and do not plan to join the SEC until 2025, when the conference’s current television rights contracts expire with ESPN and Fox.

Sooners coach Lincoln Riley said he didn’t really have any thoughts on the Big 12 additions since it doesn’t change anything now. When recruits and parents ask when the Sooners will be switching leagues, he tells them the plan is still 2025 and that he will let them know if anything changes.

“We’ve been trying to be pretty honest,” Riley said. “They’re going to get an opportunity to play a high level level here at OU, no matter what league you’re in.”

The Sooners are the league’s only team to make the four-team College Football Playoff. And while they have lost in the semifinals in each of their four appearances, they have dominated the Big 12, winning the last six conference titles and 14 of 25 overall.

Oklahoma’s departure seemingly will open the way for other teams to be at the top.

“The four teams coming in, and certainly the ones here in the Big 12, a lot can change in a couple of years. So I’m not sure, you know, we’re doing anything but guessing. But, yeah, absolutely,” Texas Tech coach Matt Wells said.

“I think the opportunity is there for a fair amount of the teams in the league. And I think that could be a real, real strong point of the league,” Baylor coach Dave Aranda said. “You look at teams that are built similar. There’s a toughness to them, there is a simple can be sophisticated approach to them. It’s not going to be tricks and gadgets. It’s going to be execution of fundamentals and all that.”

Baylor will get an early preview of BYU, which visits on Oct. 16.

Depending on when Oklahoma and Texas depart, the Big 12 could have up to 14 schools for a season or two.

This is the 11th season the Big 12 has been a 10-team league playing round-robin conference schedules, since the last significant realignment a decade ago that over a two-year period saw the departures of charter members Colorado, Missouri, Nebraska and Texas A&M, along with the additions of TCU and West Virginia.

“Even though we won’t per se change conferences, it’ll be a change,” TCU coach Gary Patterson said. “What’s going to be actually be easier is if we split into divisions, Because you’re not going to have to play a round robin. If you have to play everybody in the league, then it becomes difficult. … That’s a hard deal.” 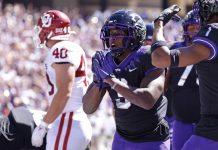