AUSTIN, Texas (AP) — Trey Faltine drove in three runs with a pair of doubles and Cam Williams hit a two-run home run in the seventh inning after walking his first four times up and scoring three times as No. 2 overall seed Texas breezed into the College World Series with a 12-4 victory over South Florida on Sunday, sweeping the Austin Super Regional.

The Bulls (31-30) grabbed a 2-0 lead in the bottom of the first on Jarrett Eaton’s two-run bases-loaded single, but Jake Sullivan was thrown out at home trying to score from first on the play and the Longhorns (47-15) answered with four runs in the top of the second — with Faltine and Silas Ardoin delivering run-scoring doubles — to take the lead for good.

Faltine’s second double drove in two in the fourth to make it 6-2. Texas scored without the benefit of a hit in the fifth, using four walks and a hit batter to plate two runs.

Collin Sullivan (3-4) lasted just 1 2/3 innings in a start for South Florida, surrendering four runs on four hits. Eaton went 3-for-3 with a double. 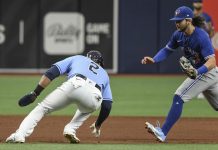 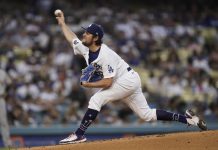