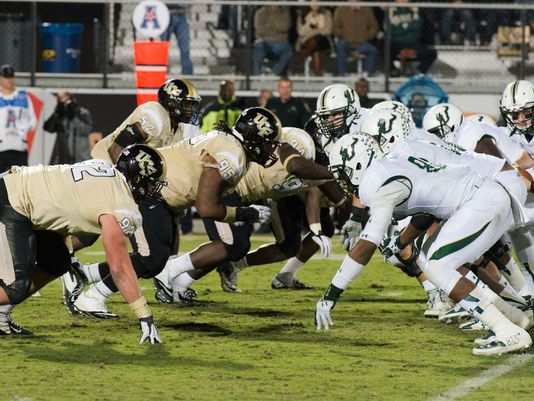 Orlando FLA- Tensions ran high on Friday as a brief pre-game altercation sparked between the Bulls and the Knights at the infamous rivalry match-up the “War on I-4” in the Spectrum Stadium. There was more pushing and shoving to come as the UCF Knights embarrassed Charlie Strong and the USF Bulls in their 5th straight loss 34-7 to close out their season.

UCF quarterback Dillion Gabriel threw for 270 yards and connected with Gabriel Davis twice in the end zone. Davis snatched 8 receiving catches for 106 yards, only 10 yards short of the Bulls total receiving yards from 7 different receivers. The Knights took off in the 3rd quarter when Running Back, Adrian Killins, broke open in the mid-field a 35yard touchdown run in the 2nd quarter. Killins ended the match-up with 14 carries for 115 yards.

“Offensively we did enough to score the points that we did.” Expressed Knights Head Coach Josh Huepel in his opening statement following the Knights 9th win of the season. “Still had opportunities that we didn’t take advantage of, but overall took care of the football in the turn-over battles. Ton of positives with the special team, Barnas did a great job tonight.”

The UCF Knights Close out their regular season with a winning record of 9-3, 6-2 in division games, and celebrated their seniors and their families with an emotional ceremony minutes before Kick-off. McKenzie Milton was in attendance alongside his parents and was celebrated for his contributions to the UCF Football program. Milton suffered a gruesome knee injury in the last rivalry match-up 90 miles down I-4 at the Raymond James Stadium against the Bulls last November.

Josh Huepel commented on Milton’s road to recovery. “He’s had to fight, right? Theres been mountain top days and there’s been days down in darks valleys. He still got mountains to keep climbing. I just told him he hasn’t played he last one, you know what I mean? I truly believe that”

The green and gold demographic of the Bulls awaits to learn the fate of their Head Coach Charlie Strong as he closes his third season for the Bulls. USF is 21-16 on Strongs’ watch but only have three wins against teams that ended the season with a winning record.

This was Strong’s’ response when asked about a fourth season. “I’ve been part of two (national) championships (as Florida defensive coordinator), I’ve won championships (as Louisville coach) and I’ve got a good coaching staff and they know how to win. … I never worry about that. The only thing I worry about is that we have a good coaching staff, I know our coaches are good coaches, and we can go get it done.”

UCF awaits to hear of the date and opponent of their Bowl competitor.