The UCF Knights were able to overcome a slow start in the first half against the Southern Jaguars and picked up a big win by the final score of 76-60.

The Knights got off to a slow start in the first half as usual as they started the game down 7-2 and was trailing for a good part of the half, though they did manage to get the lead by halftime 34-32.

“I think we were really sluggish at the beginning of the game,” senior forward AJ Davis said. “But we locked in on defense and we were pretty efficient in the first [half] but we got even more efficient in the second half.”

One of the issues that UCF keeps running into is the turnovers. They had eight in the first half alone but were able to reduce that to just five in the second half. However, that still adds up to about 13 turnovers for the game and 19 points came off of those turnovers.

“We just have a lot of like unforced turnovers,” Davis said. “We just got to kind of settle down and take away those little plays you know little out of bounds or little travels or stuff like that.”

In terms of what they did good in this game, the Knights ball movement was key in the win. The Knights had 18 assists as a team and had the willingness to share the basketball and make the right basketball play. That’s a season high in assists the team has had as well this season and that’s one of the key things that they have been focusing in practice. 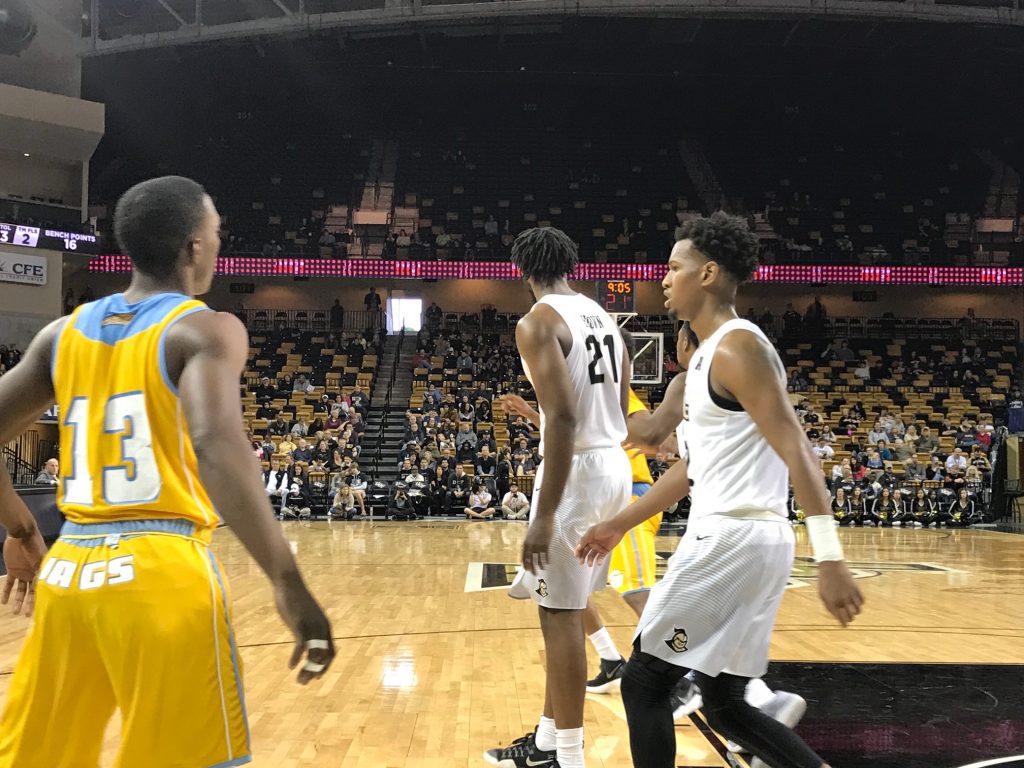 “That’s something we’ve really been focused on these last several weeks,” UCF head coach Johnny Dawkins said. “I think as you start to see us make more connecting plays like you saw tonight, I think you’ll start you know have more productive evenings but I’m really happy with the ball movement.”

Another bright spot in the game was the inside presence of Tacko Fall on the offensive side of the ball.

Fall, a junior, has really started to look more comfortable down low and in the post. He has added a few moves to this game and it really showed in this game. He had 18 points on 8-10 shooting while also adding nine rebounds.

“I would say more comfortable, I worked on it all summer,” Fall said when talking about his post-game. “I didn’t really take a break. Right after the season ended last year, I was in the gym and coach had great people working with us. So, I think I’m really comfortable working on the post now, definitely more then I was last year.”

The Knights also got a boost from senior Djordjije Mumin who usually doesn’t get much time on the floor. He was a big part of why the Knights played well for the most part. He scored 12 points, a career-high, on 4-7 from the three-point line and was active on both sides of the ball. He gave the energy that the Knights needed to win this game.

With the win, the Knights are 6-3 on the season and will get ready for the quick turnaround on Tuesday when they face Southeastern Louisiana at 7 p.m. on ESPN 3.