UCF Knights goes off on Memphis and picks up the biggest win of the season by the final score of 40-13.

“I love being these guy’s coach, that was an unbelievable performance by our guys,” UCF head coach Scott Frost said. “They were hungry to play. We beat a really good team tonight and we out played them.”

They played so well, Frost believes that anyone could have coached this team tonight and still get the victory.

“A bozo could have coached this team the way these guys were playing tonight,” Frost said.

The Knights started off the game with the longest drive of the season, going 17 plays, 92 yards and finished the drive off with a Touchdown by McGowan.

However, Memphis bounced back and took the ball across the field and got a Touchdown on their first drive as well.

Memphis continued to control the game until the second quarter came around and that’s where the Knights took over the game.

It started when Adrian Killins destroyed the Memphis defense by going 96 yards, untouched for the TD. It is the longest play from scrimmage in UCF history and the longest play in American conference history That got UCF the lead, 16-7 with a little over five minutes left in the 1st half.

“It’s a great feeling,” Killins said. “In this offense, we expect to make big plays but to set the record at UCF, it’s a great accomplishment.”

UCF continued to put it on Memphis, when Mike Hughes gets a tip interception thrown by Riley Ferguson and ran it back to the 50-yard line.

Then, Milton threw the ball to Tre ‘Quan Smith for an easy 34-yard TD and blew the game wide open. 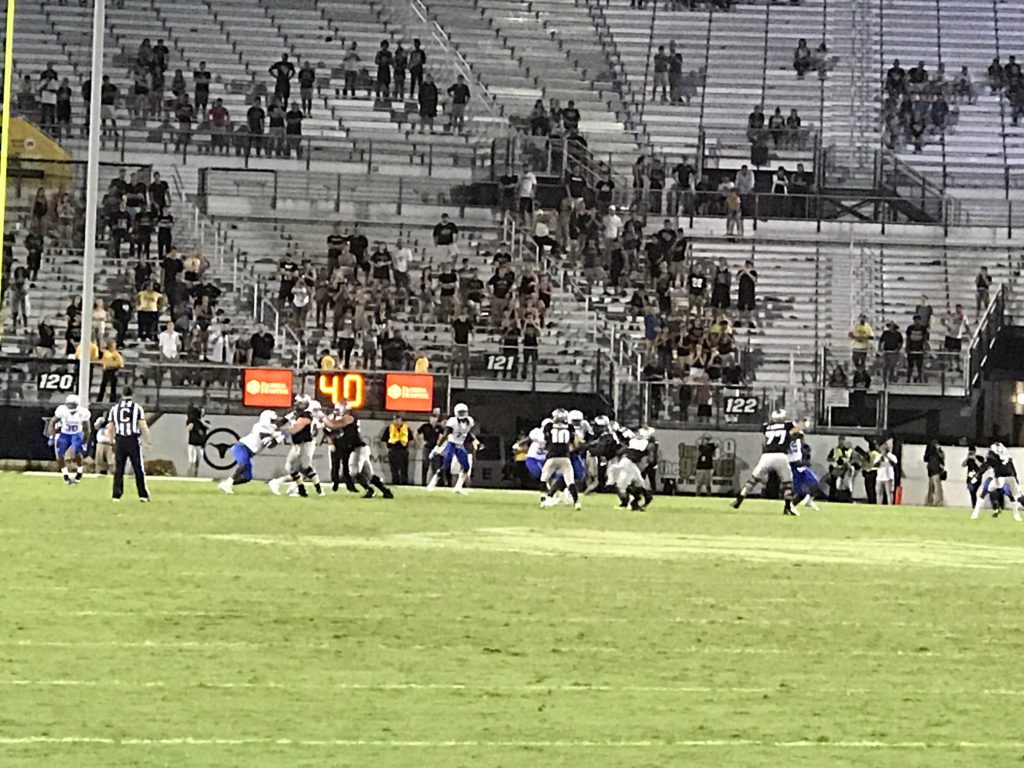 Killins continues to run all over the field with his world class speed in the second half when he took a short pass, and evaded defenders by taking it 19 yards to the house for the Touchdown.

Ferguson continued to look shook out there on the field by throwing another interception, this time by Kyle Gibson.

Ferguson turned the ball over a total four times, including three interceptions which is a recipe for disaster when you face the Knights defense.

“We got a defense that loves to play football,” Frost said. “They play together, they communicate and they run and hit. I’m just kind of a spectator when the defense is on the field because those coaches got it and those players got it and it’s fun to watch.

Speaking of offense, the running game was at its best again tonight, rushing for 350 yards. In the last two games, they have combined for 600 yards on the ground.

The offense has been so much better than last year and the stats proves the case.

Because of the way this game has transpired, many in the media and fans on social media are talking about UCF being in the top 25 ranking in the Nation but that’s not what they are focused on right now.

“It would be cool,” Shaquem Griffin said jokingly. “I’m not worried about being ranked. That’s a number on the side of our name. So I’m not to much worried about that. I just want to play football and make sure I can play with guys like McKenzie [Milton].”

It may not mean that much to the team, but that would me so much to that program from where they first began when Frost was hired as an head coach.

They were 0-12 before Frost took over. They made a culture change and a system change on how to play the game of football and went 6-6 in the first year with many questions on the offensive side of the ball still to be answered and now they are playing their best football since they won the Fiesta Bowl a few years ago.

That would be a major accomplishment for the program, the school and the city of Orlando who has been through a lot in the past couple of years.

With the win, the Knights are now 3-0 (1-0 AAC) and will now shift their focus to another conference opponent, Cincinnati.