In one of the most exciting games in the college football season, the 15th ranked UCF Knights went to War against the USF Bulls in their annual War on I4 game and came out on top 49-42 to win the War on I4.

“Proud of our team,” UCF head coach Scott Frost said. “They’re a really good football team too [USF], and they won a lot of games over the last two years. I was really impressed with their entire team.”

The game was a back and forth affair with both teams getting hot when they need to the most. It started off with a USF Touchdown. Then the Knights came right back and scored a touchdown to get the game tied.

After a turnover on downs by the Bulls, the Knights went on a huge run, scoring 21 unanswered including the first UCF touchdown of the game and was up 21-7 in the first quarter. Many thought this game could have been over at that point, but then Quinton Flowers happened.

“Quinton has a reputation of being a runner and not a thrower,” Frost said. “He threw for 500 yards tonight. We busted some coverage, but he made some throws too.”

Flowers started to find his groove in the second quarter where he torched the Knights. He went off for 348 yards in the first half and three touchdown passes and brought the team back within one.

Flowers again dominated in the third quarter, this time with his legs. He rushed for 70 yards in that quarter only and got scored the touchdown that put USF up front 34-28.

Flowers stat line for the game, 24-45, 503 yards, four touchdowns, and one interception. He also rushed for 102 yards and scored a touchdown as well. That’s 605 yards of offense for him.

The pressure was building, but Coach Frost and the team never felt pressured and weren’t tight and continued to play the game.

“That’s what I admire about our team,” Frost said. “I didn’t see a lot of guys tight and nervous and acting like, oh we might lose. They just went out there and played.”

The action picked up late in the fourth quarter when UCF got the ball back with a little over eight minutes left in the game, McKenzie Milton rolled out of the pocket and found Dredrick Snelson wide open for a 45-yard touchdown pass to regain the lead.

“We actually ran that same play we ran earlier that he scored on,” Milton said. “It’s just a little fake man zone, get outside the pocket, and if you got a clean edge and the end doesn’t rush upfield, then you can see if you’ve got your guys dragging deep and theirs nobody around him.”

After that, UCF holds USF to a punt, and they get the ball back. Milton gets Otis Anderson involved on a screenplay and Anderson takes it to a house to extend the lead to 42-34. 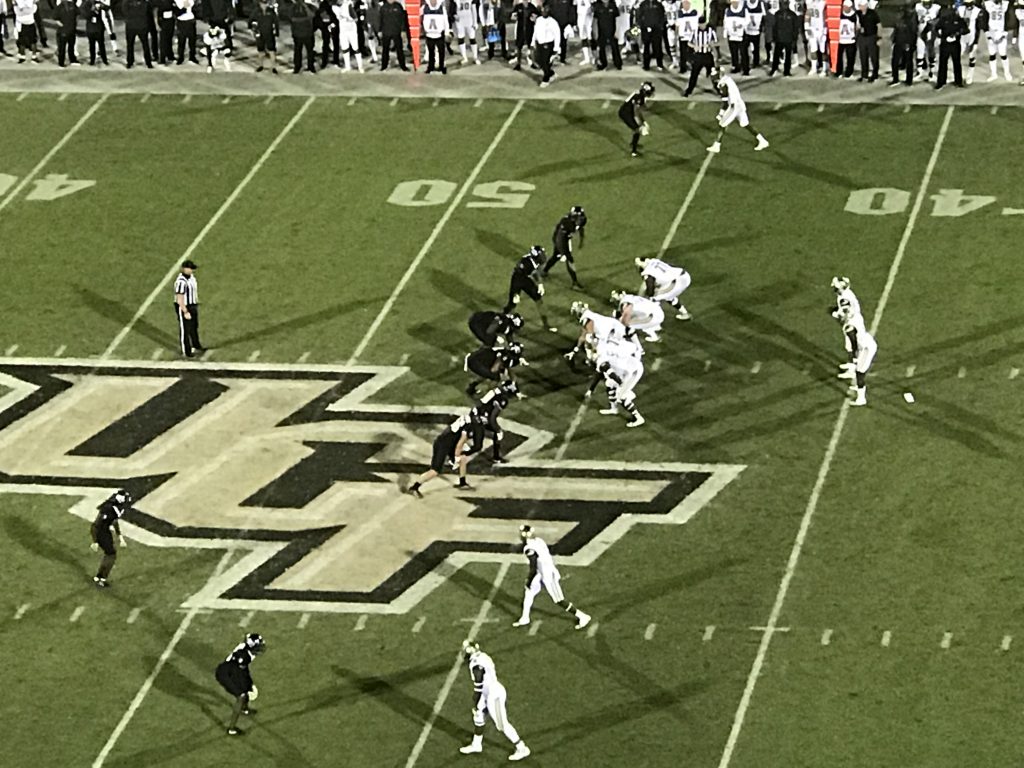 After USF somehow gets a score to go 42-42 after also getting a crazy two-point conversion, USF kicked the ball off to Mike Hughes, and Hughes takes it to the house for the touchdown to get the lead back to 49-42. The crowd went nuts as the press box was shaking.

“Those guys up front did a good, and it was a lot of creases open,” Hughes said. “I took the one across the field and scored.”

Some of the reactions from the players after the game said it all.

“I think my heart skipped like four beats,” Milton said.

“That was wild, I told him after the game I couldn’t even celebrate,” Shaquem Griffin said. “I was stuck, and when I seen him running, I was like I don’t believe this was happening.”

The game ended when USF fumbled the ball in the last minute of the game and the Knights were able to take a knee to end the game.

Next game, the Knights will be preparing for the American championship game when they host Memphis on December 2nd.