There were 32 turnovers, 62 fouls, 76 free throws attempted, 32 percent shooting by one team and slightly over 40 percent for the other.

“Not aesthetically pleasing,” Sampson said after No. 21 Houston held off South Florida 69-60 on Saturday night. “I felt bad that people had to watch that.”

Breaon Brady had 13 points and nine rebounds, Armoni Brooks scored 11 points and Nate Hinton added 10 to lead the Cougars (18-1, 5-1 American Athletic Conference), who squandered most of a 16-point second-half lead before pulling away for good over the last 10 minutes.

“Two teams playing hard, competing,” Sampson said, adding that his team’s depth likely was the difference. “We had just enough bodies to get through.”

Houston limited USF to 23.8 percent shooting (5 for 21) in the first half and finished the period on a 16-6 run to open a 35-25 lead. The Cougars built the advantage to 16 before Collins scored six points over a two-minute stretch to help the Bulls whittle their deficit to 47-43 with 10:38 remaining.

Brison Gresham’s three-point play and Galen Robinson’s first points of the night on a short jumper settled the Cougars, who methodically built the lead back to double-digits. Collins made three free throws to make it a six-point game before Houston closed it out from the foul line.

“I think we did some good things, but not enough to beat a team like that,” South Florida coach Brian Gregory said.

Houston: The Cougars won for the third time since suffering their only loss, 73-69 at Temple on Jan. 9. They get another crack at the Owls on Jan. 31 in Houston, where the Cougars have the nation’s longest home winning streak at 29 games.

South Florida: The Bulls have lost 25 consecutive games to ranked opponents. USF’s last victory over an AP Top 25 team was Feb. 29, 2012 at Louisville. They haven’t beaten a ranked team at home since defeating Seton Hall seven years ago this month.

Robinson, who finished with five points and two assists, joined Derrick Daniels as the only players in school history with four 100-plus assist seasons. He’s four assists away from becoming the sixth player in program history with 500 in a career.

Houston’s leading scorer Corey Davis was hampered by foul trouble and finished with just six points on 2-of-4 shooting in 18 minutes.

Brady, Brooks and Hinton took up the slack. And, the Cougars got some timely contributions from Robinson and Chris Harris, Jr., who came off the bench and had five points, four rebounds and two blocked shots in seven minutes.

“That’s the thing about our team,” Sampson said. “We don’t depend on one player.”

Houston was whistled for 33 fouls. USF was called for 29. 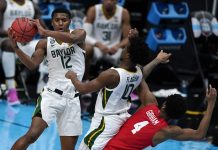 Ticket to “The Big Dance Punched,” No. 20 South Florida women beat UCF 64-54 in AAC title game and headed to the NCAA Tourny

Live Coverage: No. 20 South Florida women advance to a finals showdown with rivals UCF in tonight’s final at 10 p.m.