TAMPA – If Saturday night is a sign of things to come for the USF passing game, then things are going to be pretty exciting this season.

Blake Barnett, the graduate transfer quarterback who previously played at Alabama and Arizona State, wasted little time in endearing himself to the green and gold clad faithful in the Bulls’ 34-14 win over Elon at Raymond James Stadium.

In fact, it took only five plays. A 40-yard touchdown pass to redshirt freshman receiver Randall St. Felix, his first career reception and one of 11 Bulls to make their debut, capped USF’s first drive for a 7-0 lead.

By the time the first half concluded, Barnett’s numbers looked similar to his career totals coming in. He entered the game having completed 14-of-24 passes for 259 yards and two touchdowns. As he trotted off the field at the end of the first half with the Bulls leading 24-0 he was 14-of-20 for 223 yards and three TDs.

The 22-year-old, who arrived at USF in May, finished with 305 yards and three touchdowns while completing 24 of his 34 attempts. Barnett also added 31 yards and a touchdown on the ground. He was pulled late in the third quarter in favor of Brett Kean with USF in command at 31-7.

“He wasn’t even here in the spring,” said coach Charlie Strong. “We’re talking about fall camp as when we got him. You know he has ability because he would have never been who he was, being an elite quarterback and everything. Watching him come out tonight and play well is good for his confidence and it’s good for the whole team.”

Led by St. Felix (game high seven receptions and 143 yards) USF’s receivers often got behind the Elon defense and Barnett was rarely under duress. Still, that shall not take away from Barnett’s effort, which took place nearly two years to the day since his only previous career start. That was Alabama’s 2016 season opener against USC.

“It’s been a long time coming,” he said of the opportunity to start Saturday night. “It’s been a journey throughout this process. To go out here and go out with these guys meant a lot. I am proud of how the offense performed and I thought I played well.”

The Bulls took advantage of interceptions by end Vincent Jackson and corner Mike Hampton, the first career picks for both. The first one terminated the game’s opening drive, which Elon took down to the USF 27. Five plays later Barnett and St. Felix were celebrating their touchdown.

Hampton’s pick early in the second quarter set the Bulls up at the Elon 25-yard line and led to Jake Vivonetto’s 33-yard field goal to make it 10-0.

“I thought we did pretty good tonight,” said redshirt freshman safety Bentlee Sanders, who recorded 10 tackles in his debut. “We started off well and then you just have to finish. We didn’t like our finish. I think we let up. They shouldn’t have scored.”

It was a while before the defense, which recorded three sacks and 12 tackles for loss, saw the field in the second half. In contrast to the four first-half scoring drives, the longest of which consumed 2:39, the Bulls could not have asked for a better way to open the second half as they went 86 yards on 16 plays while consuming 6:13. A two-yard touchdown run by Barnett capped the drive and gave USF a 31-0 lead.

“I think I looked up at the clock and I was like, ‘God almighty we’ve run a lot of time off,’” said Strong. “It was nice to see us grind it out. A lot of times with this offense it is quick-strike where you hit the big play. To take the time off the clock was big for us.”

Bulls Bits
The Bulls improved to 17-5 in season opener and 15-1 in season opeenrs at home….Running back Jordan Cronkrite, who was listed as No. 1 on the depth chart, was held out. Strong said the Florida transfer was banged up in practice, but he could have played Saturday night and that the preference was to hold him back for next week’s game against Georgia Tech…With Cronkrite out Trevon Sands started at running back and had 22 yards on five carries. Johnny Ford led the team with 43 rushing yards…..Safety Jaymon Thomas and linebacker Khalid McGee each recorded 11 tackles to lead the team….Australian punter Trent Schneider averaged 36.8 yards on four punts in his debut….Vivonetto’s 33-yard field goal early in the second quarter was his first with USF since transferring to USF from DIII John Carroll University prior to last season. 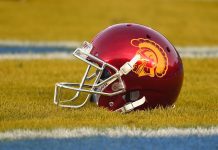