Former USF quarterback Quinton Flowers showcased his speed and strength in front of numerous NFL scouts on Saturday. Spectators are still questioning whether the Miami native will be drafted as a quarterback or running back.

Flowers was invited to the Combine as a quarterback, yet his skills suggest many scouts are considering him as a running back. He was the top performer in the 40-yard dash with a 4.63 sec run and three cone drill with a 6.81. Flowers was also a top-five performer in the broad jump.

Once he’s finished, he will go through RB drills (as requested by NFL teams).

Coming into the Combine, NFL analysts projected him to be a late-round pick or undrafted free agent signee. His 5’10” frame isn’t ideal for an NFL quarterback, but it’s the position Flowers still wants.

“I came to do quarterback,” Flowers told Tampa Bay Times’, Rick Stroud. “I’m doing quarterback this week. But at the end of the day, I’ll do whatever it takes for the team to win. That’s the type of guy I’ll always be. I just want to put a smile on the coaches’ face and have fun.”

The 2016 AAC Offensive Player of the Year threw for over 8,000 yards while at USF with 71 passing touchdowns and 3,672 yards on the ground with 41 rushing touchdowns. 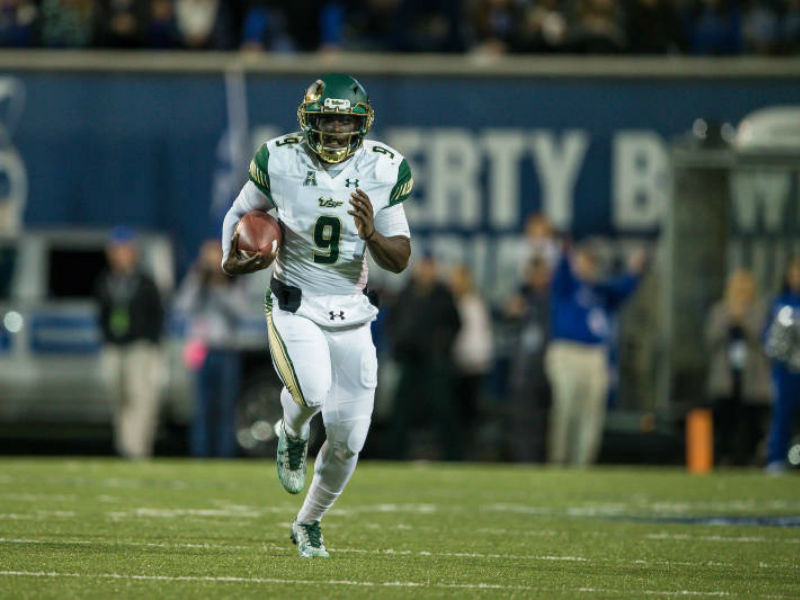 Other USF Grads Stand Out At The Combine

Former USF wide receiver Marquez Valdes-Scantling also worked out on Saturday in Indianapolis. The St. Petersburg native was a top performer in the 40-yard dash with a 4.37 second run and the broad jump with a 10’4″ jump.

Valdes-Scantling is expected to be a late-round pick who will add speed with his long stride to any NFL team.

Former USF DT Deadrin Senat worked out on Sunday in front of scouts. Senat is expected to be the first USF player taken in the draft. He was a top performer in the bench press with 35 reps and 11th out of all DT’s in the 40-yard dash.

“Not enough people talk about this kid…he’s a good football player. I really think he is a better football player than people want to give him credit for.”
– Mike Mayock on @Deadrin10 #BullStrong 🤘💪 #NFLCombine pic.twitter.com/ILSIbrjHks

The 6’0″, 314-pound grad seemed to be a match for the Philadelphia Eagles and was seen having conversations with the Eagles’ defensive line coach Chris Wilson.