TAMPA — The start of conference play against SMU looked much like the start of the season against Wisconsin.

That is to say not much good happened Saturday afternoon at Raymond James Stadium in front of an announced 28,8550 that was closer to 10,000.

USF fell behind the Mustangs 34-0 at the half in what would be a 48-21 loss. The defeat, which dropped the Bulls to 1-3, was the ninth straight against an FBS opponent.

Jordan McCloud, making his second start and first against an FBS opponent, completed 8-of-19 for 66 yards and two interceptions. He was also sacked six times and did not play the second half because of what Strong said was a sprained wrist.

Blake Barnett played the final two quarters and led the Bulls on three  touchdown drives, mostly against SMU’s backups and after the deficit swelled to 41-0 late in the third quarter.

“Jordan was injured and Blake came in and played very well,” said Strong, when asked about the quarterback situation heading into next week. “What we have to do is make a decision on the guy who we want to go with and just go with him. Blake did a real good job when he came in.”

Strong said he had yet to speak to the training staff about McCloud or Barnett, who took a heavy hit during the Bulls’ final possession and remained on the ground for a few seconds, though he did not miss a play.

A couple of more unsightly aspects to the game were 12 penalties, including six personal fouls, for 134 yards. Also, the McCloud and Barnett were sacked a total of 10 times.

“Personal fouls is what allowed them to continue to put drives together,” said Strong.

The story of the first one-plus quarters was turnovers, starting with the one the Bulls did not get.

On the first play of SMU’s second series, safety Nick Roberts got his hands on a Buechele pass at midfield with nothing but green grass in front of him. Instead of a pick, the ball deflected off his hands and into those of Mustangs’ receiver Myron Gailliard, who picked up 17 yards.

Four plays later SMU opened the scoring on a nine-yard run by Xavier Jones with 9:58 remaining in the opening quarter.

The Mustangs scored their next two touchdowns off a pair of Jordan McCloud interceptions. On the first one, which took place on the ensuing possession, the Bulls drove 77 yards to the SMU 13. McCloud looked for tight end Mitchell Wilcox in the end zone, but senior safety Rodney Clemons had tight coverage and came up with the pick.

“It was a corner route and I have to make the tough catches,” said Wilcox. “I have to adjust to the throw and get it. It was a tough ball.”

SMU then put together an 80-yard drive that was capped by Jones’ 36-yard touchdown run through a gaping hole with 1:56 left in the quarter.

On the Bulls’ next possession, McCloud was picked by Clemons at the SMU 35-yard line. After Clemons was flagged for taunting, the Mustangs set up shop at their own 20. Nine plays later, on 4th-and-2 from the Bulls’ six, quarterback Shane Buechele looked right and found receiver James Proche for a touchdown and a 21-0 lead two minutes into the second quarter.

The defense did not make many plays against Buechele, who as a true freshman was Strong’s starting quarterback at Texas in 2016. The grad transfer did not throw his first incomplete pass until 2:03 left in the half and only because lineman Darius Slade broke free and forced him to throw the football away. To that point Buechele had completed all 13 of his passes for 164 yards with three touchdowns.

Buechele, whose 10-yard TD run late in the third quarter made the score 41-0, did not play the fourth quarter. He finished 21-of-25 for 226 yards, three touchdowns and an interception.

The Bulls got on the board when Barnett and tight end Jacob Mathis connected on a 23-yard touchdown with 26 seconds remaining in the third quarter to make it 41-6. The score marked the Bulls’ first points against an FBS opponent at Raymond James Stadium since 3:16 remained in the third quarter of the Gasparilla Bowl against Marshall, a stretch of nearly eight quarters.

The Bulls play at UConn next Saturday. 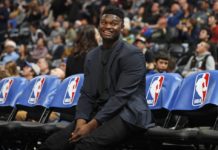