It wasn’t the start that many were anticipating for the beginning of the Strong Era, but USF once again showed its resilience coming from behind to beat San Jose State. It just didn’t start out pretty.

In fact, you could actually call it pretty ugly. Last year the Bulls averaged 511 yards of offense a game, tonight on the other hand they went -10 yards on their first two possessions. By the middle of the first quarter, they managed -1 yards.

To say USF was disappointing in the first quarter of the game is an understatement. The Bulls went three-and-out on their first three possessions and weren’t having much success on the ground either.

Thanks to big defensive plays the second quarter was a turn around for the young program. After being down 16-0, USF took off to score 28 unanswered points and take the lead, which would remain theirs. The Bulls would go on to score a touchdown in each the third and fourth quarters making the final score 42-22.

There was a definite improvement on the defense. While it started out rocky, the defense stayed true to the game and came up with big plays.

Having been focused on tackling throughout the spring and fall head coach Charlie Strong’s rebuilding of the fundamentals seemed to have paid off. The defense caused three turnovers and held the San Jose Spartans from advancing on fourth down conversions.

On the other side of the ball, the rushing game finally put to rest any concerns involving former running back Marlon Mack’s departure. Darius Tice helped get the offense rolling with a couple of break through runs. He put up 94 yards of the Bulls total 315 rushing yards.

Lead back D’Ernest Johnson put up 99 rushing yards of his own while quarterback Quinton Flowers had 70 yards. The game proved that the run game was still a viable option for USF.

Another Bull stepped up to fill an empty spot in the game. Wide Receiver Marquez Valdes-Scantling was speculated to be Flowers favorite target this year with the loss of WR Rodney Adams to the NFL. And this game proved he would be exactly that.

Valdes-Scantling had 91 receiving yards averaging 15.2 yards per touch. Between him and Darnel Salomon, the passing game remains a strong threat for the Bulls.

Breaking Down The Numbers

USF took off from a scary start to score 42 unanswered points over a record of 101 plays. The Bulls racked up 548 total yards, 315 of which were rushing.

With a 42-22 victory, USF extended its streak of 30-plus point games to 18, which still leads the nation. The Bulls have now won four straight season openers. 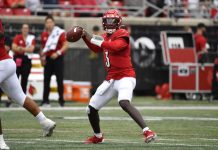