TAMPA — South Florida wasted no time in putting an unsightly loss to IUPUI behind them. The Bulls shot 62 percent from the field in the first half en route to a 69-55 win over Wofford at the Yuengling Center on Thursday night.

Justin Brown led the way in the opening 20 minutes by pouring in 16 points on 6-for-8 shooting, including 3-for-5 from beyond the arc.

“My teammates really got me a lot of good open shots,” said Brown, who did not add to his point total in the second half, and didn’t have to. “I didn’t shoot real well the last game. I have a great support system and everybody told me to continue to shoot and not to let (the bad game) get to my head. I just went out tonight, they found me when I was open, and I let it fly.”

Letting it fly is pretty much how the evening went. The Bulls, who went with four guards, shot 55 percent for the game. David Collins had a game-high 18 points on 7-for-11 shooting after being hindered by a bad back against IUPUI.

Perhaps the stat that stood out most was the Bulls (2-2) had a 16-2 advantage in points off turnovers in the first half, when they turned the ball over only four times.

“The first half we took care of the ball,” said coach Brian Gregory. “If we have good offensive possessions and take care of the basketball, we’re just such a different team.”

USF was a much different team on a night when a 12-0 run in the first half opened a 40-21 lead with 3:54 remaining. The Bulls never let the Terriers back in it.

“We have to keep getting better,” said Gregory. “We are not there yet, but we are working everyday to get there.”

After four home games to start the season, USF heads to the Cayman Islands for three games starting with Loyola Chicago on Monday afternoon. 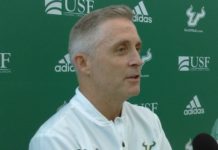 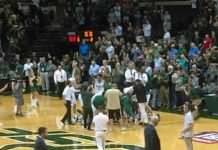 USF Tips Off The CBI Championship Series Tonight Against DePaul 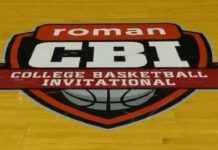 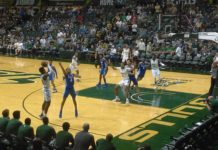 USF Holds On In Wild Game Against Memphis