IRVING, Texas (AP) — So if the CFP expands the four teams to 12 teams would the existing bowls be used for the first round of playoffs? Tampa would make a logical site for playoff games with both the Gasparilla and Outback Bowls already on the books.

As per CBS Sports lead College Football writer Dennis Dodd the use of the bowls as playoff sites is something that is very much under consideration.

The non-profit organization Bowl Season that represents the 43 postseason bowl games has asked the College Football Playoff that all games in an expanded playoff be played entirely within the bowl system. In addition, the organization has asked for a spot at the table in further CFP discussion.

In a letter dated Monday and obtained by CBS Sports that went out to the 130 FBS presidents, athletic directors, coaches and 10 FBS commissioners, the organization stated:

“An expanded playoff should include all playoff games being played within the traditional Bowl structure, not the home site of one of the participating teams. The Bowls would provide a neutral, competitively fair setting for these games as they have throughout their history.”

As currently proposed, a 12-team playoff would include four first-round play-in games for eight teams at campus sites. The next two rounds in the quarterfinals and finals would be played at bowl sites. Those sites would presumably be the current New Year’s Six bowls – Cotton, Fiesta, Orange, Peach and Rose — though the specific sites have yet to be officially determined.

In the 12-team playoff model proposed earlier this year — and still being debated by t he conference commissioners who manage the CFP —- a selection committee would still have a role, but it would be less impactful because it would place more emphasis on winning a conference.

Which conferences are emphasized — if any — is one of biggest unresolved issues.

In the the last few weeks, the Big Ten and Atlantic Coast Conference commissioners have pushed for a tweak that would guarantee automatic bids only to the Power Five conference champions and the highest-ranked champion from the other five conferences in the Bowl Subdivision.

That suggestion has not been well received by most of the other commissioners, especially those outside the Power Five who have been trying to get rid of that distinction.

“I think, to have credibility, I think there has to be a foundation of fairness meaning you don’t give selected groups, divisions, conferences, in this case, preferred status. There isn’t any playoff that you can point to does that,” American Athletic Conference Commissioner Mike Aresco said Sunday.

American Athletic champion Cincinnati made history Sunday, becoming the first team from outside the Power Five to reach the four-team playoff in its eight-year history.

But it should be noted, that if a 12-team playoff format was used this season the teams and seeds would have been no different if the so-called six-and-six model was used or the five-plus-one model.

The strange part about how this has become a sticking point in expansion talks is that using past final CFP rankings as an example, only last season would the best six conference champions not have included each Power Five winner.

Last season, both Cincinnati from the AAC and Coastal Carolina from the Sun Belt finished ahead of Pac-12 champion Oregon. But the Ducks played an abbreviated Pac-12 schedule because of the pandemic. There is little reason to believe that wasn’t an anomaly.

In the committee’s final rankings released Sunday, the second-highest ranked Group of Five conference champion was Louisiana-Lafayette of the Sun Belt at No. 23. The lowest-ranked Power five champion was Pittsburgh of the Atlantic Coast Conference at No. 12.

In fact, the losers of each Power Five conference championship game were all ranked ahead of Louisiana-Lafayette.

There could be a compromise between six-and-six and five-plus-one where if a second Group of Five conference champion finishes head of a Power Five champ, the G5 team is guaranteed a spot and one of the at-large spots is taken away. But that might not go over well with everybody, either.

Anyway, what would the playoff have looked like this season if the proposed 12-team format —- in which the top four conference champions get first-round byes and those four first-round games are played on campus — was used?

Here goes, though we made one small tweak to the format (teams from the same conference should not play in the first round if it can be avoided with a small shift in seeds):

No. 9 Oklahoma State at No. 8 Mississippi

Pitt-Georgia winner vs. Baylor in the Fiesta Bowl

Michigan State-Notre Dame winner vs. Cincinnati in the Peach Bowl

Utah-Ohio State winner vs. Michigan in the Rose Bowl

Oklahoma State-Ole Miss winner vs. Alabama in the Sugar Bowl 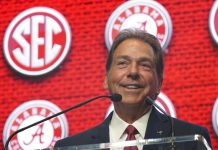