With Steven Stamkos returning from an injury that sidelined him for most of the 2016-17 NHL season and Tampa Bay sporting a roster loaded with scoring talent, expectations were somewhat high for the Lightning when they started their 25th anniversary campaign.

Perhaps only the most ardent, optimistic Lightning fans could have expected what unfolded starting in October.  The Lightning will almost certainly finish 2017 with the best record in hockey, the most goals in hockey, the fewest goals surrendered in the Eastern Conference, and the two top scorers in the game.

Stamkos’ return has had an incredible impact.  The all-world center has been particularly sharp in his passing, finding people for assists all over the ice.  That said, it has been Nikita Kucherov who has sent the Bolts to a new level.  At the moment, Kucherov leads the NHL in goals (24) and points (51).  The forward has succeeded on the first line alongside Stamkos, and on the team’s second line with the hard-working Brayden Point.

The work of netminder Andrei Vasilevskiy has also contributed to the Tampa Bay surge.  Vasilevskiy has matured into one of the top goaltenders in all of hockey, taking Ben Bishop’s workload with no problem whatsoever to lead the NHL in wins and be among the league leaders in time on ice.

At this point in the season, the NHL looks up to the Lightning.  They’re currently the clear favorites for the President’s Trophy for the league’s best record, which also makes them among the favorites for the Stanley Cup.  For good measure, Tampa Bay also hosts an All Star contest that will likely involve more than its fair share of Lightning players.

The Lightning aren’t just trying to match the 2004 squad and win a championship.  In their 25th anniversary, it seems as though they’re putting together a team that might be talked about in the same reverent tone as founder Phil Esposito’s legendary Big Bad Bruins, or general manager Steve Yzerman’s Red Wings teams of the late nineties.

College football in Florida has, traditionally, been dominated by the three biggest programs in Florida, Miami, and Florida State.   In 2017, this was expected to continue, with FSU highly ranked in the preseason poll, Miami at the tail end of some big changes, and Florida getting another chance with new quarterbacks.

The biggest college game in the state in 2017 was not FSU-Miami.  Florida-FSU was relegated to cable.  The game once called The World’s Largest Outdoor Cocktail Party was all Georgia.  It was USF-UCF, the War on I-4, that took the big spotlight.

The rivalry game was moved to Black Friday in a national broadcast.  In fact, that rivalry bumped the more famous Gator-Seminole matchup from ABC, and from Friday afternoon.  The Bulls came into the Bounce House with one loss.  The Knights came in with none.  Were it not for a resurgent Miami program, it would be the unofficial Florida Championship that awards no trophy but feels like a significant accomplishment.

The game did not disappoint, and in fact that could be seen as an understatement.  The football game that unfolded is a strong competitor for the most entertaining football game in 2017, college or professional.

Quinton Flowers, supposedly a run-first quarterback at USF, threw for 503 yards and 4 touchdowns in the game.  He also ran for 102 and scored a touchdown on the ground.  The Bulls came back from deficits of 21-7 and 42-34 to send the game down to the wire.

With the score tied at 42 and just 1:41 on the clock, Central Florida’s Mike Hughes took a kickoff 95 yards to put the Knights ahead for good, guaranteeing them a spot in the American Athletic Conference title game against Memphis.

Much like Lane Kiffin at FAU, the programs at USF and UCF sent out a message this November that college football in the state of Florida is so much more than just the same three programs.

Hurricane Irma was a scary one for the state of Florida.  For an entire week, models showed the giant storm targeting the state, sometimes headed for a landfall near Miami, other times for a direct hit on a Gulf coast that is not particularly prepared to get hit head on by a hurricane.

For that week we all held our breath.  Many were forced out of their homes and onto roads that could barely handle the evacuations.  The eventual losses were devastating and heartbreaking, even if the outcome was not as apocalyptic as it could have been.  Some parts of the state are still picking up the pieces.

The sporting cost of that hurricane is, of course, pretty much irrelevant.  Yes, the Buccaneers and Dolphins lost their bye weeks due to a rescheduled week 1 matchup, but the NFL was left with no positive option there.  Colleges cancelled games, with FSU only rescheduling theirs in an attempt to salvage bowl eligibility.

The Tampa Bay Rays, who just weeks before had loaned their stadium to a Houston Astros team fleeing a hurricane of their own, were forced to play a weekend series against the Yankees in Citi Field.  (The Rays, by the way, were praised heavily for their hospitality when Houston came to visit, and of course many Tampa Bay area residents cheered on the Astros’ World Series run as though Houston was just up 66th from St. Pete.)

Sports really only come into the “serious matters” equation when the storms clear and it’s time for everybody to move on.  That first weekend after Irma, with the Buccaneers at home for the Bears and college football back in action, proved cathartic in a lot of ways.  Tribute was paid to all the emergency workers who put their time and well-being on the line to help in the wake of the hurricane, including many who came in from all over the country.  We were reminded that, for all America’s divisiveness these days, when pressed we are still all in this together. 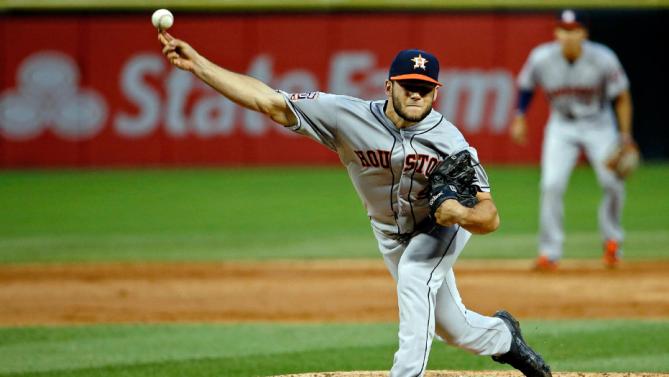 Professional teams aside, never let anybody tell you that Tampa Bay is not a baseball hotbed.  Few places produce as much MLB talent as the bay area, and in 2017 one of its native sons came up big in the biggest of games.

Lance McCullers Junior grew up in the Tampa Bay area as part of a baseball family.  His dad played in the big leagues, and he was raised with the opportunity to learn the game from a pro and learn the work ethic needed to make the Majors.

With the Houston Astros in the postseason, it was McCullers that proved a big part of the difference.  The 24 year-old pitcher was brilliant in two ALCS appearances against the New York Yankees, including a four inning save in game seven in which a grand total of zero Yankees made the full trip around the basepaths.  That, of course, is the Yankees’ lineup featuring Aaron Judge and Gary Sanchez, a vaunted squad that captured baseball’s attention and imagination throughout the season.  Even in Houston, with homefield advantage, it can be intimidating to take on a lineup like that.  McCullers allowed just two baserunners in those four innings, using his nearly unhittable curveball to send the Astros to their second ever World Series appearance and their first American League title.

In the World Series, McCullers drew the start in game three.  In a seven game series, the pitcher who starts game three tends to also start any potential game seven.  In that third game, McCullers went 5.1 innings, surrendered three runs, and earned the win.

Getting the game 7 start in a World Series is a tremendous honor.  After his performance against the Yankees, McCullers had earned it.  The game was an all-hands-on-deck situation, and McCullers only faced ten batters, but he allowed zero runs and put Houston in a good position.  The Astros were ahead 5-0 when McCullers was pulled from the game, and of course they held on to win.

Without the man from Lutz, the Astros may well have lost that ALCS to New York.  They may have lost the World Series.  With Lance McCullers, they won.

Thanks to Anthony Abruzzo and Jim Williams for their linked articles.