Jersey City, NJ- The 2019 FedEx Cup Playoffs begin this week with the 53rd edition of the Northern Trust. In the third year with the current name and the third trip to Liberty National Golf Course, 121 of the 125 highest ranked players in the FedEx Cup standings take to the Hudson River to open the final stretch of the PGA Season. The first of three playoff events has plenty of implications from the immediate FedEx Cup points chase (2,000 points for the winner) and the weekend’s champion’s purse ($1.65 Million), to long term like President’s Cup spots. Let’s take a look at some of the more intriguing stories ahead of the playoff opening.

For the record, the four players in the top 125 not taking part in the weekend are Paul Casey and Henrik Stetson, who both chose not to participate, Sam Burns, who has an ankle injury, and Rafa Cabrera Bello, who is expecting the birth of his first child.

Now for the Tournament participants.

Bryson DeChambeau: The reigning Northern Trust Champion and last Dell Technologies Champion enjoyed a breakout year last season. Three of his five wins and nine of his 17 top ten finishes came last season. 2019 has seen regression, but he’s still netted five top-fives, a second place finish at the 3M Open in Minneapolis, and a win at the Shriners in Las Vegas. This season has been hampered by a pretty dramatic retool to his golf bag. He’s trying to restart his game after a pair of poor showings his last two times on the course. He missed the Open Championship cut and was 48th at the St. Jude Invitational. DeChambeau missed the cut at this tournament in 2017 at Glen Oaks and won last year by four strokes at Ridgewood. The technical SMU Mustang tees off the first tee with Justin Thomas and Tommy Fleetwood at 12:44 on Thursday.

Brooks Koepka: The reigning PGA Tour Player of the year has made a strong case for a repeat in that award. Brooks Koepka starts the tournament in 1st place with a 572 point lead over Rory McIlroy. He’s notched eight top-ten performances, missed only one cut (Arnold Palmer Invitational), finished the runner up thrice, and won three tournaments, including his fourth major at the PGA Championship at Bethpage Black. His last time on the course was a win at the WGC-FedEx St. Jude Invitational. Koepka is the hottest golfer on earth and certainly a man to watch this weekend. He tees off at 8:16 AM off the 10th hole with Rory McIlroy and Matt Kuchar.

JT Poston: The Western Carolina alum is riding the best weekend of his professional career into prime position. JT Poston edged Webb Simpson by one stroke at last week’s Wyndham Championship in his home state of North Carolina. He earned 500 FedEx Cup points that, along with his two other top-10 performances at the Desert Classic and the RBC Heritage, lifted him to 27th in the standings. He opens the week at 7:43 am on Thursday morning off the 10th tee along side Scott Piercy and Tiger Woods.

Shane Lowery: The thrill of victory is still fresh in Lowery’s mind. This week is his first PGA Event since claiming the Open Championship at Royal Portrush and partying the time up with family and friends. His celebration went famous for his second PGA Tour win and first major. Particularly notable was how Lowery lost his PGA Tour Card at the year’s outset. The Irishman worked from his lowest point to win the first Open Championship competed on the Island of Ireland in 58 years. Lowery tees off at 8:05 AM alongside Adam Scott and Kevin Kisner.

Ben An: There are a share of young golfers trying to make a name on Tour at Liberty National this weekend. Possibly the most interesting from a cultural perspective is Korean born Byeonghun An (anglicized as Ben An); a 27 year old from Seoul who came up in American collegiate golf at Cal Berkeley, winning the 2009 US Amateur. As a pro, he’s claimed wins in the Challenge Tour, Korean Tour, and European Tour. He’s still looking for a PGA win. An earned two second place finishes last season at the Memorial and the RBC Canadian Open and earned his way onto the first three FedExCup Playoff events. This season, he’s notched three top-10 performances and finished third his last time out, at the Wyndham Championship. He’s aiming to represent his country well and lift his stock on Tour. He finished 40th in the 2018 edition of the Northern Trust at Ridgewood. 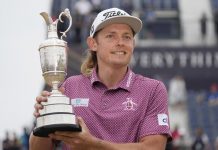 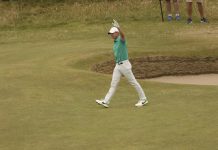 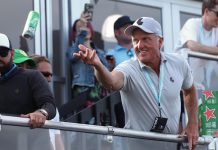 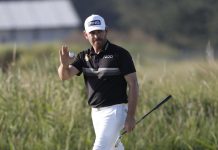 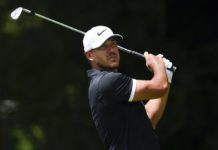