The first virtual NFL draft kicked off on Thursday evening, which included a message of hope in the fight against the current pandemic.

In a short video narrated by Peyton Manning, we were reminded of the sacrifice, service and love of the frontline heroes. This was followed by Harry Connick, Jr., together with his daughter, singing the National Anthem, and a message from Commissioner Roger Goodell saluting those who are fighting against the pandemic.

During this historic time, the Head Coaches and General Managers across the league were seen sitting in front of cameras in their living rooms, kitchens and home offices to make their 2020 draft picks.

The first pick went to the Cincinnati Bengals who took quarterback, Joe Burrow from LSU. The 2019 Heisman Trophy winner led the LSU Tigers to a National Championship in New Orleans this year, setting a single season record for total offense. Burrow, who grew up in Ohio, wore a Nike custom t-shirt during the draft representing his hometown. The Bengals, who went 2-14 last year, should be excited with their top pick, and for Burrow he said going first in the draft was a “dream come true.”

Although he was drafted from LSU, Joe Burrow started his college football career with Ohio State, who had several players get drafted in the first-round on Thursday. The Redskins selected Ohio State defensive end, Chase Young, with the second pick, and the Detroit Lions, took cornerback, Jeff Okudah.

Okudah going third is reportedly the highest pick of a cornerback this century. Ohio State Head Coach, Ryan Day, described Okudah as a “student of the game” who late at night is the only guy watching film.

The Tampa Bay Buccaneers traded up for the 13th pick to draft offensive tackle, Tristan Wirfs. With a 4.85 second 40-yard dash, he was the fastest offensive lineman at the combine this year. Bucs General Manager, Jason Licht said the speed is “an indication of how athletic he is,” adding that Wirfs has “agility, good feet and he can run.”

That was not the number one reason why the Bucs drafted him, however, as Licht explained Wirfs came from a program at Iowa known for coaching offensive lineman. Licht added “they know how to work and it will be a seamless transition to the [Bruce Arians] offense.”

According to Licht, when he told Wirfs “you’re a Buccaneer, playing for Bruce Arians and playing with Tom Brady and the rest of the team,” Wirfs replied that he “couldn’t be happier.”

While Wirfs has played both right and left tackle, Licht explained the plan for now is to put him at right tackle, protecting Quarterback Tom Brady. Wirfs will have to earn his spot, but the Buccaneers are excited to add this young player to the team, who Licht described as “a great athlete, more importantly or just as importantly he’s a great guy, he’s a hard worker, he’s very smart . . . in addition to being a great player.”

In reaching their decision to trade up, Licht explained, “we saw that the run tackles happened a little later than we expected, and we thought that there was a chance someone could come up and get it him.” He added, “we didn’t want to risk it; as Bruce says ‘no risk it no biscuit’ and so we had to give up a little capital to go get him.” Licht and Arians felt it was worth it because of the player and the position.

Miami Dolphins drafted Tua Tagovailoa, the junior quarterback from Alabama with the fifth pick. While some analysts expected Tua to go higher, he was coming off a dislocated hip injury which appears to have recovered. Miami decided to take a risk on Tua’s durability, and pursue the potential for a franchise quarterback, which they have not been able to secure since Dan Marino 20 years ago.

Tua is from Ewa Beach Hawaii, and attended the same high school as NFL quarterback Marcus Mariota. He is a left-handed quarterback, who reportedly switched from throwing with his right hand. That appears to have paid off with 87 career touchdowns and only 11 interceptions.

He is known for playing fast and getting rid of the football quickly. This brought him success at Alabama, including his freshman year when he helped lead the Crimson Tide to their 2017 National Championship. It has been reported that Tua’s grandfather had a dream that his name would be known around the world- as a first-round draft pick, Tua certainly will be known in Miami and throughout the national football league.

With the ninth pick, the Jacksonville Jaguars selected C.J. Henderson, a defensive back from University of Florida. Henderson was described as being extremely athletic, with confidence in his speed and ability to bait quarterbacks into making bad throws that he picks off. Henderson, who was a running back through high school, reportedly ran a 4.39 second 40-yard dash at the NFL combine.

He is expected to fill A.J. Buoye’s spot, who was traded last month to the Denver Broncos. In discussing joining the NFL, Henderson said he would “love to pick off Patrick Mahomes. It’s self explanatory.” Mahomes, quarterback for the Kansas City Chiefs, led his team to a Superbowl win last year.

*To help raise money in support of COVID-19 relief efforts, the NFL established the Draft-A-Thon, which can be found at nfl.com/relief. 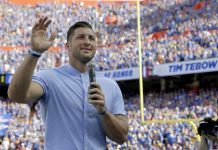 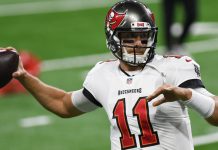 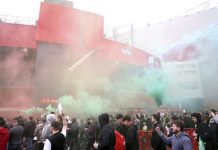 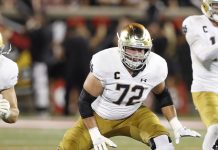