TAMPA, Fla. (AP) — DeSean Jackson isn’t making any bold predictions about how good the Tampa Bay Buccaneers can be on offense.

With the start of training camp still six weeks away, the speedy receiver says it’s way too early to draw any conclusions.

“It’s a process, but everybody is dialed into wanting to get better and bettering themselves and working on the little things to come together as a team,” Jackson said during a three-day mandatory minicamp that concluded Thursday.

“With everybody at the top … of their game, I think definitely it should be a scary sight for defenses,” the 10th-year pro added. “But it’s still early on. We want to be humble, yet still at the same time, know what we’re capable of doing.”

Jackson is one of three new playmakers the Bucs have added around Jameis Winston this offseason.

The appreciative young quarterback said the 30-year-old has provided a sense of confidence and calm on the practice field for a team still learning what it takes to win consistently in the NFL.

Jackson starred in Philadelphia and Washington before signing a three-year, $33.5 million contract with Tampa Bay in March.

So far, the transition has been smooth.

“I just really like to come in and just be myself, whatever that comes with. Sparking the offense on big plays and speed, whatever it is that is needed. That is what I’m here for,” Jackson said.

“I’m going on my 10th year this season, so I definitely know what it takes to play at a high level. I’ve been on some pretty good teams, too, that compete at a high level,” the receiver added. “Hopefully bringing that here, and rubbing off on some of these guys, we can win some games.”

The Bucs envision Jackson, still one of the league’s fastest players, as an ideal complement to Mike Evans, a big, physical receiver who’s prospered in his first three seasons in the NFL despite being double-teamed by opponents most of the time.

Coach Dirk Koetter likes the way the offense is coming together, though he — like Jackson — is tempering his excitement.

The Bucs dispersed after Thursday’s practice and won’t reassemble for training camp until the last week of July.

Koetter said it’s difficult to get a good read on where the team is at this point because they’ve been practicing in shorts and against one another.

“We had specific things we wanted to work on in all areas, and we definitely worked on them. But it’s hard to judge how much better you got until you get against another team,” the coach said.

“Our guys are hungry, our guys want to do well,” Koetter added. “We’re on the right track, but everything’s a process and you can only go as fast as you can go.”

Winston, who threw for more than 4,000 yards in each of his first two pro seasons, said he’s not concerned about how the team will handle heightened expectations that accompany the addition of Jackson and others.

Anything short of earning a playoff berth will be a disappointment, coming on the heels of last year’s winning record.

“You’ve got to execute. All the (media) can talk and tell us and predict our future,” Winston said. “But at the end of the day, we’ve got to get on that field … and we’ve got to play.” 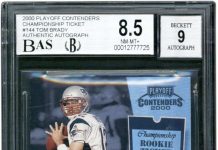 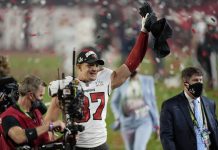 Buccaneers re-sign “Gronk” to a new contract keeping him together with Tom Brady for at least one year.

Bucs and the rest of the NFL get ready for 2021 salary cap issues. 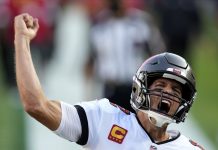