The unscripted nature of sports will always keep audiences engaged.

No matter the point spread, or the matchups, or the venue, anything can happen once the football has been kicked off. Football’s unpredictability maddens gamblers, makes fools out of analysts, and keeps fans at the edge of their seat.

The Super Bowl, of course, is replete with great moments to serve as reminders that some outcomes in sports are better than anything a script-writer could ever come up with. 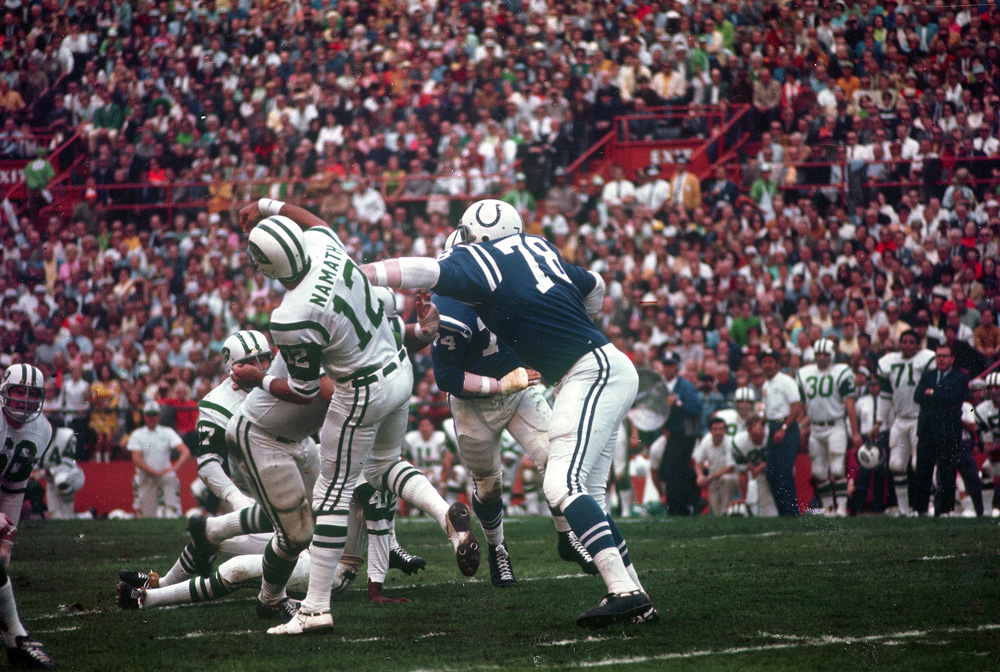 What people expected: The formal coronation of Johnny Unitas, Don Shula, and the Baltimore Colts as one of the great football teams. The Colts were overwhelming favorites in Super Bowl III. Of course, at the time, the Super Bowl was not necessarily considered what it is today. To many at the time, the AFL’s best could never compete with the NFL, and it was a foregone conclusion that the older league’s champion would easily handle the younger league’s champion. Joe Namath had been great at Alabama, but in the pros his Jets were never supposed to compete.

The Jets’ famous Super Bowl III upset changed the league. Had it gone according to plan, which was of course a Colts blowout win, what we now know as the sports world’s biggest annual event might have in the early days been seen as a bigger league beating up on a smaller one.

Instead we got an event that became inherently unpredictable from that point, the first in a long string of upsets. Instead, we got Joe Namath being a celebrity athlete who didn’t look and act like every other celebrity athlete. Super Bowl III was critical to establishing the NFL’s reputation.

What people expected: The NFC’s representative had won thirteen Super Bowl titles in a row, starting with the Bears in 1985 and continuing deep into the nineties. Add to that how the Green Bay Packers were back in the game after winning Super Bowl XXXI, and how John Elway’s Broncos had been on the losing side of two big games to that point, and it led people to believe the Packers would win handily.

What people got: Instead of Brett Favre’s Packers winning their second in a row, it was John Elway who totally transformed his legacy that fateful Sunday night. Behind fantastic running from Terrell Davis, phenomenal tight end play from Shannon Sharpe, and a stout Denver defense that held Mike Holmgren’s offense at bay when needed, it was the Broncos who pulled off a milestone upset, and the first trophy for Elway’s mantle.

Super Bowl XLVII: The Lights Go Out In New Orleans

What people expected: In the first half of Super Bowl XLVII, the Baltimore Ravens were all over the San Francisco 49ers, going into halftime with a 21-6 lead. They then came out of halftime with a 108 yard kickoff return touchdown by Jacoby Jones to inflate that lead to 28-6.

What people got: During the third quarter, the lights went out for a large portion of the Superdome, delaying the game a bit. The 49ers came out after that like a championship team, getting as close as 31-29 midway through the fourth quarter. The Ravens still held on to win in Ray Lewis’ final season with Joe Flacco winning Super Bowl MVP, but the game became much closer than it had been and it left people wondering if something happened when the power went out.

What people expected: A great defense beating a great offense in the Super Bowl has been a pattern for a long time, but in the buildup to Super Bowl XLVIII the task just seemed tremendous. Peyton Manning had been rejuvenated in the 2013 season, setting records with a high-flying Bronco offense. Even the excellent Seattle defense was expected to struggle with Manning’s attack. At best the game was seen as a toss-up, with many picking the Broncos to win.

What people got: Not only did the Seahawks win, of course, they did so in one of the most lopsided Super Bowls to have taken place. Seattle won the game by a dominant 43-8 margin, showing off both the strength of the Legion of Boom defense and the emergence of Russell Wilson. The Broncos would go on to win one of their own two years later, behind an improved defense that dominated that game.

Super Bowl XXXVI: A Dynasty Begins Out Of Nowhere

What people expected: The Greatest Show on Turf, behind Kurt Warner and Marshall Faulk, seemed to be on pace to collect their second Lombardi Trophy in three years. People were talking about the Rams being a “mini-dynasty” in a salary cap league, which at the time seemed almost far-fetched for any team. St. Louis came in a 14 point favorite, one of the highest lines in the game’s history. The Patriots, despite being on a great win streak during which they seemed almost destined for greatness, were not expected to put up much of a fight.

What people got: A dynasty did get started on that February night in New Orleans. The problem was, that dynasty was not the Rams. At the time a defense-first team, the Patriots came out of the tunnel as a team in a Super Bowl first. Their attack was balanced, with Tom Brady distributing the ball to guys like Troy Brown while a multi-headed running game kept the clock moving. The defense played the game of their lives, slowing down Faulk and never letting Warner have an easy pass. Even after a Rams late surge tied the game, Brady and company marched down the field to set up an Adam Vinatieri field goal. The quarterback and coach Bill Belichick have since been a part of seven more Super Bowls.