The 70-lap event, which will last approximately 70 minutes, will be broadcast live on NBCSN. The NBC broadcasting team of Leigh Diffey, Townsend Bell, Paul Tracy and Marty Snider will call the action. The pre-race activities will be highlighted by the Indianapolis Fire Department’s Voices of IFD singing the national anthem and New York City first responders giving the command to start engines.

2019 Formula One rookie standout Lando Norris is making his second INDYCAR iRacing Challenge start this week after winning his debut April 25 at Circuit of The Americas.

Here are “5 Things To Look For…” heading into Saturday’s First Responder 175 presented by GMR:

Ed Carpenter Racing owner-driver Ed Carpenter will compete Saturday in his No. 20 Chevrolet with a special paint scheme featuring the Riley Children’s Foundation, which raises funds and awareness for Riley Hospital for Children in Indianapolis.

Carpenter and his family are longtime supporters of Indiana’s only comprehensive children’s hospital. He also will continue his support virtually Tuesday, May 5 through Giving Tuesday Now, a worldwide day of giving to bring awareness to nonprofits raising funds during the COVID-19 crisis.

Tony Kanaan was supposed to make the first start of his TK Last Lap tour in the NTT INDYCAR SERIES – a five-race partial season, all on ovals, with A.J. Foyt Racing – in the 104th Indianapolis 500 presented by Gainbridge on Sunday, May 24 before that race was postponed until Sunday, Aug. 23 due to the COVID-19 pandemic.

So, 2013 “500” winner Kanaan perhaps has one of the tougher mental adjustments to make to not racing on the Indianapolis Motor Speedway oval during May for the first time since he made his Indy debut in 2002. But he is taking some solace in competing in the First Responder 175 presented by GMR on Saturday at the virtual IMS.

“Obviously, I’m excited,” Kanaan said. “I think it’s a mixed feeling because I woke up today, today is May 1st, I looked at my calendar. Somebody just texted me today, ‘What was the worst investment you made in 2020?’ I said I think it was my calendar planner. I looked, we have it in the office, in two days I was going to be doing the Indy half-marathon.

“I’m ready to go do the real thing. It will be exciting. It will be something for us to do at least to represent a little bit the month of May this weekend.”

Only three of the 33 drivers in the field for the First Responder 175 presented by GMR have no career starts on the Indianapolis Motor Speedway oval – Virgin Australia Supercars champion Scott McLaughlin, Formula One standout Lando Norris and NTT INDYCAR SERIES rookie Alex Palou.

The other 30 drivers in the field have at least one career start in the Indianapolis 500 presented by Gainbridge, the Freedom 100 Indy Lights race or the Big Machine Vodka 400 at the Brickyard NASCAR Cup Series race on the IMS oval.

Palou could be a dark horse for a surprise victory Saturday. He won a practice race Thursday in the No. 55 Dale Coyne Racing with Team Goh Honda, continuing a strong performance for the entire INDYCAR iRacing Challenge for the Spaniard. Palou finished fourth on April 4 at Barber Motorsports Park, led four laps and finished 10th on April 11 at Michigan and led a lap and finished ninth last Saturday at Circuit of The Americas.

The event is open to the public but limited to 500 teams of any size. The cost per team is $33, with a portion of proceeds being donated to the IU Health Foundation, which works through philanthropy to improve Indiana residents’ health.

Teams can sign up at hambonestrivia.com/weeklytrivia. Registered teams will be sent a private YouTube link where they can see and participate in the virtual contest.

The Road to Indy Presented by Cooper Tires, the ladder series of INDYCAR, will begin a second virtual series – the TireRack.com Road to Indy iRacing eSeries Presented by Cooper Tires – on Wednesday, May 6, beginning with World Wide Technology Raceway at Gateway. The five-round series will feature three ovals and two road courses, and all registration fees will be donated to the UN’s COVID-19 Solidarity Response Fund.

INDYCAR is the Indianapolis-based governing body for North America’s premier open-wheel auto racing series known as the NTT INDYCAR SERIES. The series features an international field of the world’s most versatile drivers – including five-time series champion Scott Dixon, reigning series champion Josef Newgarden and defending Indianapolis 500 winner Simon Pagenaud – who compete on superspeedways, short ovals, street circuits and permanent road courses. The season, which runs from March to September, currently consists of 17 races in the United States and Canada and is highlighted by the historic Indianapolis 500 presented by Gainbridge held annually in May at the Indianapolis Motor Speedway. The NTT INDYCAR SERIES, the Indianapolis Motor Speedway and IMS Productions are owned by Penske Corporation, a global transportation, automotive and motorsports leader. For more information on INDYCAR and the NTT INDYCAR SERIES, please visit www.indycar.com. 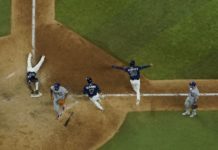