We’ve spent all year throwing out playoff scenarios, and we’ve narrowed the field down to 8 teams for 4 spots. You will hear plenty of opinions all week of who should get in the College Football Playoff and who deserves a spot and why they’ve earned it. I believe there is one true chess piece remaining. The Clemson Tigers are the queen piece in Orlando for the ACC Title game.

Why is Clemson the key? Because they are the one team playing this week that can lose a game and open a spot for debate. I don’t think the committee has a lot to think about unless Clemson loses. Virginia Tech holds the hopes of everyone still dreaming of a spot.

Alabama is in. Even a loss won’t bump the Tide out. Don’t worry about conference champions. Don’t worry about top 25 wins (the SEC teams crumbling as I noted in this space a week ago has hurt the Tide’s resume). Bama passes the simplest test question:

Are they one of the 4 best teams in the country?

So, yeah, they’re safe. Ohio State is done, and despite my insistence that Penn State is more deserving if they win the Big Ten, I don’t think the committee will see it that way. So the Buckeyes I believe are safely in.

A Clemson loss opens the door for the B1G to get a second team and Washington to get in without any debate. If the Tigers win however, things are pretty straight-forward. The only conversation will be the one we’ll be having all week: Buckeyes or B1G champ?

So, Clemson is the in-team that can become the out-team and allow for a replacement among the other contenders. The City Beautiful is center stage this weekend as we wrap up the regular season.

1. Alabama (12-0)- The Tide appear to be playing their next two games in Atlanta, win or lose this week.

4. Washington (11-1)- The Huskies have nothing non-conference, but they do have 4 top 30-ish wins, and their loss was to what will presumably be a top ten team in USC.

2. Ohio State (11-1)- The Buckeyes have 3 top 10 wins at this moment and couple more solid wins. They cannot win a conference title though and their resume will only get worse this weekend technically, while teams that could pass them will improve their’s.

3. Clemson (11-1)- The Tigers either wrap a bid up, or open one up to the field. Their wins over FSU and Louisville are their best work, and throwing in the Auburn win and more bowl-eligible wins gives them the edge over Washington for the 3rd spot. They face a top 30-ish team in Orlando though while the Huskies get a top 10 team, so their grasp on this spot isn’t firm. 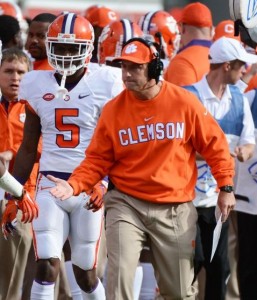 5. Michigan (10-2)- The Wolverines deserve this spot based on 3 top 10 wins, and 2 last second losses. However, one of their wins will suffer a loss in Indy, and they don’t play this week which means no title to add to their resume so being jumped is a likely scenario. It looks like the Rose Bowl vs. USC/Colorado or the Orange Bowl vs. FSU for Michigan.

6. Colorado (10-2)- I give them the narrowest of edges to the Buffs over Wisconsin with incredibly similar resumes. I’d also give them the 4th and final playoff spot with a Pac-12 title.

7. Wisconsin (10-2)- Almost identical to the Buffs. Problem for both programs could be that they each lost to Michigan, albeit in the Big House in a close game for each. It’s the only thing the Wolverines can hang onto right now.

8. Penn State (10-2)- The fortunate thing for the red hot Lions is that they beat Ohio State. That to me puts them in a win and in situation…but I repeat, the committee will not see it that way in my opinion. Perhaps the multi-team conundrum is the reason they’re left out. Not being compared to just Ohio State, but 2 other teams at the same time.

The Sooners are on a great run, but are out because they just don’t have great wins, and both of their losses were more of the blowout variety. The Big 12 winner is going to the Sugar Bowl. Worth noting again I’d be ticked if I was Oklahoma State and I won Bedlam this weekend and finished off what should have been an 11-1 season. They may still have finished 5th, but it’s unfortunate. 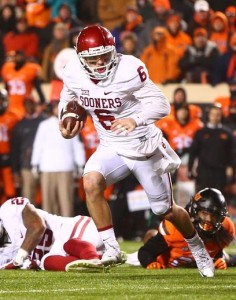 The season has taken some odd twists and turns, but result will be debating a champion vs. a non-champion this offseason. That is assured. After that, it’s on Clemson to play themselves in, or allow someone else to join the party. I don’t think it would be Michigan, but the Wolverines did potentially beat a pair of conference champions so that’d be a heck of a conversation next Monday if not only Ohio State got in, but Michigan too.