Born in Mobile, Alabama, “Hammerin’ Hank” had 755 home runs over a career that spanned from 1954 to 1976. He broke Babe Ruth’s longstanding career home run record and held the record himself for over 30 years–until Barry Bonds broke it in 2007.

He was inducted into the Baseball Hall of Fame in 1982. Later in life, he served many roles with the Atlanta Braves, where he spent most of his playing career.

“Henry Louis Aaron wasn’t just our icon, but one across Major League Baseball and around the world. His success on the diamond was matched only by his business accomplishments off the field and capped by his extraordinary philanthropic efforts. We are heartbroken and thinking of his wife Billye and their children Gaile, Hank, Jr., Lary, Dorinda and Ceci and his grandchildren,” Terry McGuirk, Braves Chairman, said in a statement.

Even into his 80s, he continued to fight for more diversity in baseball and had lobbied for efforts to encourage more young Black athletes to choose baseball.

“I would like to see more Blacks in baseball, and it’s just a matter of them going out and playing,” he said.

The former slugger had just received his COVID-19 vaccine two weeks before his death and told the Associated Press that getting vaccinated made him “feel wonderful.”

“I don’t have any qualms about it at all, you know. I feel quite proud of myself for doing something like this. … It’s just a small thing that can help zillions of people in this country,” he said. 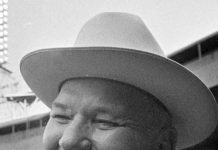 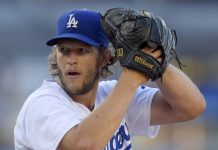 NLDS: Dodgers wake up and slam the Braves 15-3. Atlanta leads the series 2-1 and LA has Kershaw on the hill tonight FS1. 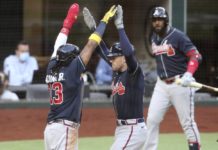