Since 1984 the Breeders Cup has become the single biggest event in horse racing and this weekend is no different with plenty of super racing. The 2021 Breeders Cup races are being run at Del Mar Thoroughbred Club just north of San Diego and it is one of the most beautiful tracks in the United States as well as one of the most historic.

For horse racing fans the action starts at 2:30-8:00 p.m. and you will be able to watch a live stream at NBC Sports Live. 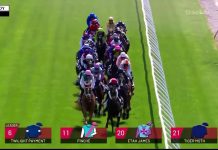