There are still moments, even after nearly four decades, when Ernie Myers has trouble believing it all really happened for his North Carolina State team.

The series of tense upsets.

The airball-turned-buzzer-beating dunk to stun top-ranked Houston and Phi Slama Jama. And the 1983 national championship that came with it, capping a run unlike anything college basketball has seen before or since.

“We kind of said we put the madness in March, as in what you see today,” Myers said in an interview with The Associated Press. “That’s why people watch the tournament, because they want to see the upsets.”

Fans won’t get that chance this year with the NCAA Tournament canceled because of the coronavirus pandemic. Still, the sixth-seeded Wolfpack’s win is oft-replayed lore every March and CBS was showing the game Saturday as part of a weekend of March Madness classics broadcast to fill the void on what would have been the first weekend of the tournament.

There’s Lorenzo Charles stuffing home Dereck Whittenburg’s missed 30-footer for the 54-52 win against a team with future NBA greats Hakeem Olajuwon and Clyde Drexler. There’s the late coach Jim Valvano running around searching for someone to hug after just the latest tournament nail-biter for the “Cardiac Pack,” who also edged No. 1 seed Virginia in a regional final to end 7-foot-4 center Ralph Sampson’s college career.

“You’re talking about it gives the fans hope – man, it gives us hope every day that if you don’t give up, anything can happen,” said Cozell McQueen, who had 12 rebounds against Houston then celebrated by climbing to stand atop one of the rims.

All March Madness games will be played near Indianapolis

All of March Madness in one place this year? It could happen in Indianapolis. 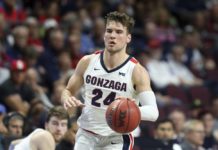 COVID-19 Will Impact College Sports In A Major Way