As the regular NFL season is halfway through its 17 games, the bookmakers are now predicting which teams will make it to the playoffs for the Super Bowl LVI.

With the playoffs coming into play in January 2022, the regular season is halfway through its way. Some teams have shown their strengths and can almost call themselves qualified for the playoffs. In this article, we look into the bookmakers’ top favorites for making it into the 14 playoff spots when the NFL is going into its final steps towards the Super Bowl at the beginning of 2022.

The Ones Considered Sure for Playoffs
7 teams can, according to the average odds from the bookmakers, already prepare themselves for the playoffs. With odds as low as -5000, -4000, and -3500 the teams are having an implied probability between 97.2 and 98 percent for qualifying. Buffalo Bills, Green Bay Packers, Tampa Bay Buccaneers, Arizona Cardinals, Dallas Cowboys, Tennessee Titans, and Los Angeles Rams have all distanced themselves from the rest of the pack and taken the top positions in the AFC and NFC

These teams have very low odds, meaning that it can be difficult to gain good profits on bets on these teams. With odds at -5000, you will only increase your bet by 2 percent, if the team qualifies. If you are looking for higher odds you can check out the daily tips at https://betting.com/. Here you will find guides on betting tactics, you can compare odds, and you can get insights into bets of multiple sports.

The Ones with a Good Chance
The top favorites have already taken 7 of the 14 spots. This is leaving a big pot of teams for the fight for the rest of the positions. Leading this bunch is the Baltimore Ravens with -650. This is giving Ravens an implied probability of qualification at 86.7 percent – which means that in six seasons like this, they will qualify five times.

Despite some losses, the New Orleans Saints are still considered some of the favorites for making it through to the playoffs. With -340 as average odds, this leaves the Saints with an implied probability of qualifying at 77.3 percent.

Los Angeles Chargers are also considered as a favorite with -270, even though the race is close in the AFC West Division. With Kansas City Chiefs (-182), LA Chargers (-270), Las Vegas Raiders (-142), and Denver Broncos (+184) all four teams are having a chance of qualifying, even though the Broncos are only having an Implied Probability at 35.2 percent according to the bookmakers.

The Best of the Rest
In the tight race for the final playoff positions, we find a group of teams not already mentioned. If you follow the standings at https://www.nfl.com/playoff-picture, you see that the teams placed In the Hunt are changing week by week. 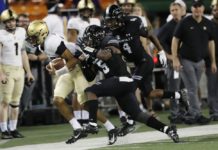