ATLANTA (AP) — Coming off a third straight NL East title and within one win of a spot in the World Series, the Atlanta Braves have extended the contract of manager Brian Snitker through the 2023 season.

The extension announced Friday includes a club option for 2024.

The 65-year-old Snitker took over the Braves on an interim basis in 2016 when the club was in the midst of a massive rebuilding job.

After going 72-90 in his first full season, Atlanta won the first of its three straight division titles in 2018.

Last season, the Braves won a postseason series for the first time since 2001, beating Cincinnati in the wild-card round and Miami in the divisional series before losing to the eventual World Series champion Los Angeles Dodgers in an NL Championship Series that went the seven-game limit.

Atlanta led the series 3-1 before the Dodgers rallied to win the final three games.

“I am thrilled that Brian will continue to lead our club on the field and in the clubhouse,” general manager Alex Anthopoulos said in a statement. “Three consecutive division titles speak to the impact of Brian and his staff, and we are pleased that he will continue to guide our club through 2023.”

Snitker has been with the Braves organization for 45 years as a player, coach and manager — most in the minor leagues — after signing with the club as an undrafted free agent in 1977.

Snitker was voted NL Manager of the Year in 2018. 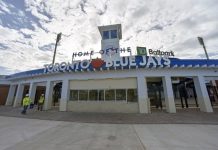 Bichette’s Walk-off Homer Lifts Blue Jays Over Yankees. First Dunedin homestand is a success they will be back April 27th 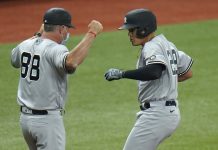 Rays Fall To Yankees In 10 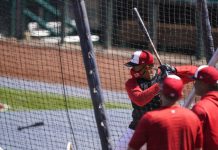