Another disappointing loss for the Buccaneers, who fell short against the Kansas City Chiefs 27-24.

Head Coach Bruce Arians admitted the offense struggled with third down conversions, most of which were third downs with 7 yards or less.  Arians said, “we had very manageable third downs and [the Chiefs] did a really good job in their blitz package and we didn’t handle it in our offense.”

The Buccaneers trailed the first quarter 17-0, and by the halftime were down 20 to 7.  From Arians’ perspective, “we needed 2 or 3 more explosive plays to shorten the field and get more points.“

It wasn’t until the second half the Bucs found a few of those explosive plays, including a 31-yard touchdown pass to Mike Evans on fourth down and three.

Quarterback Tom Brady also launched the ball downfield for a 44-yard reception by receiver Chris Godwin. Unfortunately, the Chiefs immediately got the ball back when Brady threw an interception on a pass intended for Scotty Miller.

In yardage alone, they completed 417 yards over 55 plays (an improvement over last week with 251 yards).  However, the game only works in your favor if your offense can stay on the field to get the points on the board.  Brady threw two interceptions and their third down efficiency was only 3 of 9.

The poor execution early in this game put the team too far back to recover. Brady admitted, “we battled back, unfortunately we left ourselves a big deficit to start, got off to a slow start, couldn’t convert any third downs.”

Godwin added, “we started to put it together in the second half but it was too little too late.”  He believes this is something they can fix, adding, “we’re still learning each other, we’re still growing as a unit. You see spurts of it, we just have to be more consistent.”

The Buccaneers only have 4 games left this season to try to make the playoffs. If they are going to be a high-powered offense, they need to start playing like one.

Defensively, the team has a few things to work on, as well.  The Bucs currently have a top 10 defense in the NFL.  However, when you break it down, they have the second best rushing defense in the league, but the fifth worst passing defense.  They gave up over 450 passing yards on Sunday.

Some corrections were made and they managed to hold Chiefs quarterback Patrick Mahomes to only one touchdown in the second half. Arians said, “we stopped the run, we stopped the pass, we didn’t stop the quarterback scrambling.”

Heading into the final four minutes of the game, the Bucs were down by 3 and the Chiefs had the ball. Despite keeping Mahomes contained in the pocket, he was still able to make big plays to turn over downs and run out the clock.

The defense also struggled with penalties including several offsides and encroachments.  The penalties have been costly throughout the season, with this Sunday being no exception.

Outside linebacker Shaq Barrett said, “We look like an undisciplined football team, I hate the [term] undisciplined but in order to get past that label we got to out there and watch the ball move.” He added, “we got to play consistently good football for four quarters and then we will be where we want to be at.”

Bucs inside linebacker Devin White emphasized the need to make adjustments earlier in the game and not wait until the half, saying, “we have to fix it on the field.”  He added, “I can’t let it go. I’m going to watch the film multiple times.”  White came away with 12 tackles and 3 assists on Sunday night.

Meanwhile, Barrett had a key turnover in the second quarter.  He sacked Mahomes on the Bucs 15-yard line, forcing a fumble recovered by lineman Will Gholston.  The Bucs offense turned it into an 86-yard drive and a 37-yard touchdown by running back Ronald Jones.  Jones received a screen pass from Brady and tip-toed down the sideline into the end zone.

After the game Devin White kept the players huddled up and told them, “I really felt the energy and the fight to finish that game.”  Although the outcome wasn’t what they wanted, he told the team, “I was very proud of everybody in the locker room because that shows you’re a team of grit and heart against the reigning super bowl champions.”

The Bucs have lost their last two games in a row, as they head into a bye week.  This won’t be a typical bye for the players, who often use the time off for travel and other activities.  This year, the team will need to stay focused on staying healthy and avoiding the coronavirus.

Arians said, “every team that has come back from a bye has had a virus problem.” If the Bucs come back missing multiple players, they may not be able to complete the rest of their season.

White reminded the players to stay away from the virus “because when we come back in the building there is work to do.”

The Buccaneers next game is Sunday, December 13 against the Minnesota Vikings (5-6).

The video used in this story is from the Tampa Bay Buccaneers Youtube channel. 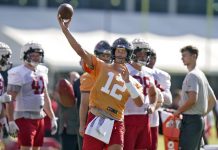 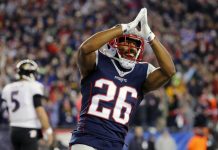