MANCHESTER, England (AP) — Manchester United supporters stormed into the stadium and onto the pitch, delaying Sunday’s game against Liverpool as thousands of fans gathered outside Old Trafford to demand the Glazer family ownership sells the club.

Long-running anger against the American owners has boiled over after they were part of the failed attempt to take United into a European Super League as well as the club’s debt.

“Get out of our club,” fans chanted as flares were set off. “We want Glazers out.”

The family, who also own the NFL’s Tampa Bay Buccaneers, have declined to engage with fans since buying United in 2005 in a leveraged takeover that loaded debt onto the club

Fans are currently unable to attend games due to the pandemic but they found a way into the stadium. They also climbed onto vantage points next to turnstile entrances

Supporters wore green-and-gold scarves and also set off flares in the colors of the club’s 1878 formation. More than 100 fans got inside the stadium and some could be seen from windows waving down to protesters.

If United loses Sunday’s game, Manchester City has won the Premier League title. United is the record 20-time English champion but hasn’t lifted the trophy since 2013. 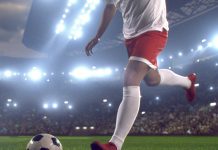 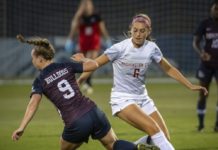 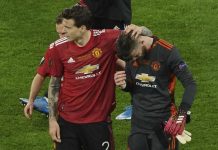