Cleveland Indians Want Fans To Stop Living In The 90s

It was the middle of the 90’s and make no mistake about it there was a renaissance in Cleveland. Along with a new arena for the Cleveland Cavaliers, the Cleveland Indians had a jewel of a new park called Jacobs Field (named after owner Dick Jacobs) which was affectionately called “The Jake.”

The Tribe was Cleveland’s Team. The Indians teams of that period of time are the benchmark to which all baseball in Cleveland is judged. The players were referred to by one name. Jose, Albert, Manny, Kenny, Omar, Sandy, Thome…..and many more. They were the talk of the town, no need for formal first and last names.

While there was a party every night at the ballpark there was a party outside as well. The Flats were bustling with restaurants ranging including Landry’s Seafood House, Dicks, Sammy’s, and the Watermark. Each side of the Cuyahoga River, infamous for catching on fire, was full of nightclubs where music blared through the night. The Rivers Edge, Fagans, Shooters, RumRunners, the Beach Club, Noisemakers, and the Basement just to name a few.

If you were living in Cleveland in the 90’s you knew the flats, you probably tipped back a few too many there, and most likely visited after one of the Indians 455 consecutive sellouts at their new park.

The euphoria at the corner of Carnegie and Ontario rose to a crescendo during the 1995 to 2001 seasons. After not finishing within 11 games of the Division Leader in any season from 1960 to 1993, the Tribe ran away with the Central Division crown in 1995 and had the best record in baseball (100-44). 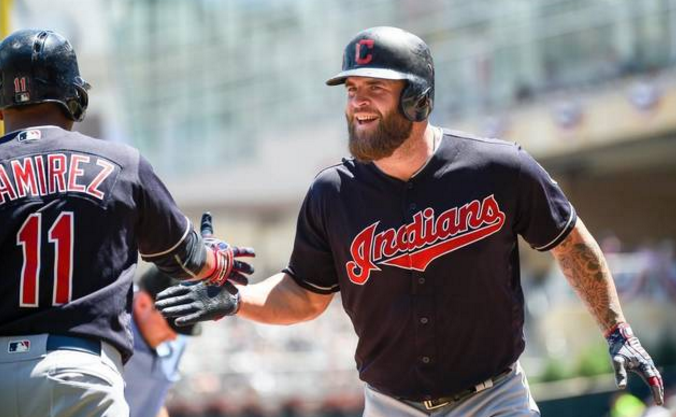 The Indians ran through the American League Postseason with little resistance sweeping the Boston Red Sox in the ALDS and defeating the Seattle Mariners in six games in the ALCS. In defeating the Mariners they became the first team to have a chance to bring the City of Cleveland a title in any sport since the 1964 Cleveland Browns. The ’95 team was unable to get the job done falling to the Atlanta Braves in six games.

They would return to the series in 1997 wining the AL Central with an 86-75 record. They were the only team in the Division that season with a record above .500. Despite never being challenged in the regular season the Tribe came alive in the postseason. They defeated the heavily favored New York Yankees in five games in the ALDS and then upset the 98-win Baltimore Orioles in the ALCS.

In many ways the fans of the 1995 team were happy to be in the postseason. As mentioned the team hadn’t been within 11 games of the Division leader in any season from 1963 through 1993 and hadn’t seen postseason baseball since 1954. Hell, the Indians hadn’t seen a Championship themselves since 1948. Losing to the Braves hurt, but there was an expectation that the Tribe would be back in the Series and a more experienced team would bring the title home.

The ’97 Tribe just had to get by the NL Wild Card winning Florida Marlins who had won 92 games during the regular season and got to the World Series by sweeping the San Francisco Giants in the NLDS and defeating the Atlanta Braves in six games in the NLCS.

The Indians and Marlins alternated wins and losses culminating in a Game Seven elimination game. The Tribe held a 2-1 lead heading into the bottom of the ninth but the Marlins rallied to tie it up on a Craig Counsel sacrifice fly. They went on to defeat the Indians on a Edgar Renteria game winning RBI single that scored Counsell in the bottom of the 11th.

As the millennium came to an end, the Indians were becoming an aging team, the crowds weren’t as intense, and the farm system had been decimated in the grand quest of trading prospects to “go for it.” Jacobs, who had been rightly credited with not only saving baseball in the City of Cleveland but bringing in Hank Peters and John Hart to develop the team into a contender bowed out.

In November of 1999 it was announced the Larry Dolan was set to purchase the club for $320 million. At the time it was the highest price ever paid for a major league club exceeding the $311MM Rubert Murdoch spent on the Los Angeles Dodgers in 1998. It was tidy profit for Jacobs who purchased the team for $35MM in 1986.

At the time of the purchase Dolan told writers, ‘I don’t want one World Series for the Indians, I want a string of them. I want to reach the Holy Grail.” A strong statement that eventually worked against him as the once lavish Indians who routinely had the leagues largest payroll under Jacobs leadership suddenly found themselves rebuilding under Dolan’s leadership.

The fans had become accustomed to filling all holes on the roster through signing a free agent or trading a prospect and being told that the team was operating on a budget and trying to build through the farm was a slap in the face. Remember……”a string of them [WS wins].”

“Cheap Dolans” became a thing in Cleveland lexicon that carries on to this day. Some of the damage was inflamed through comments by Larry or his son Paul about why the team was operating as it was. At times it seemed condescending to the fans and from a public relations standpoint was probably not the right words to use.

During the 2009 season Paul Dolan said of the Tribe’s situation, “If every four or five years we can have a shot at the World Series like we did in 2007. And compete for a playoff spot like we did in 2005, that’s as good as it gets in this market.” Probably not what fans want to hear.

In the same interview he seemed to blame fans for a lack of attendance leading to a $16MM loss that was used as reason for trading Cliff Lee and Victor Martiez at the trade deadline while each had a year remaining on their contracts.

“When we had the best record in baseball in 2007, that’s what we drew (2.2 million),” said Dolan. “That’s what we were hoping for if this team got off fast. We felt we could have the kind of success we had in 2007 if this team played up to its potential.”

In 2007, they finished with the best record in the American League and were within a game of the World Series, holding a 3-1 advantage in the ALCS. Unfortunately, they were unable to finish the Sox off and fell in seven games.

They returned to the postseason again in 2013 and hosted a wild card game but were defeated by the Tampa Bay Rays.

The energy and excitement for the Indians never seemed to reach a fever pitch in any of the seasons following the postseason appearances under Dolan’s leadership. Since 2003 they’ve only finished better than 10th in attendance in the American League (2008 and 2011). Even in this season the team finished 13th out of 15 teams in attendance.

Will this be the year that the Tribe breaks the “Curse of Colavito“? How important is it for the Indians to win the World Series? In my opinion, it’s imperative. The franchise needs to step out of the shadows of the 1990’s teams. The City needs the Jake (now called Progressive Field) to be a destination in 2017 and beyond. The Dolan’s need to become the owners that brought a title to Cleveland, the first since Bill Veeck in 1948, and stop the Cheap Dolan’s meme.