INDIANAPOLIS (AP) — When Philip Rivers first started tossing footballs as a high-school ball boy, he heaved them any way he could. The throwing motion stuck — and success soon followed.

Rivers used that strange, shot put-like style to land a college scholarship, become a first-round draft pick and eventually string together one of the greatest 17-year careers in NFL history. On Wednesday, the 39-year-old Indianapolis Colts quarterback announced his retirement.

“Every year, Jan. 20 is a special and emotional day,” Rivers said in a statement posted on the team’s website. “It is St. Sebastian’s Feast day, the day I played in the AFC championship without an ACL, and now the day that after 17 seasons, I’m announcing my retirement from the National Football League. Thank you God for allowing me to live out my childhood dream of playing quarterback in the NFL. I am grateful to the Chargers for 16 seasons, and the Colts for the 17th season.”

Rivers was one of a kind.

Between his trademark throwing style and his penchant for trash-talking without cussing, he carved out his own niche in the NFL.

There’s no doubt Rivers could sling it.

When he threw for 401 yards and five touchdowns in his second college game, then-Indiana Hoosiers coach and future NFL head coach Cam Cameron proclaimed that the North Carolina State freshman had a future in the NFL.

Rivers didn’t just play in the league — he created a legacy few achieve.

“We kind of think it started at 5, 6, 7, 8 years old, throwing a regulation-size football,” Rivers said before the season opener, explaining how he developed his style. “I couldn’t hold it, grip it, palm it, so I had to kind of lay it in my hand a little bit. You’re not strong enough to throw it, you push it. Then as you get bigger and stronger, you change it a little bit. But I think the actual motion kind of stays with what’s most comfortable and muscle memory and how you get used to throwing it.”

After being selected fourth overall in the 2004 draft, he was immediately traded from the New York Giants to the San Diego Chargers for Eli Manning. Rivers spent the next two seasons backing up Drew Brees in San Diego before taking over as the starter when Brees left in free agency.

In the 2006 season opener, Rivers made his starting debut — and then the next 251 in a row including the playoffs. Nothing kept him out — not the awkward mechanics, not the critics who thought he should retire after his final season with the Chargers, not even the torn anterior cruciate ligament he suffered against the Colts following the 2007 playoffs.

His 240 consecutive regular-season starts was the second-longest streak since 1970, trailing only Brett Favre (297), and it was one of the few stats Rivers cherished.

“It’s certainly important to me and I’m thankful that I’ve been healthy enough to be out there,” Rivers said in November. “I do think there is something about that availability, being there each and every week.”

He was more than just dependable, too.

He also finished his career ranked fifth in career completions (5,277), yards passing (63,440) and touchdown passes (421), and as the Chargers’ franchise record-holder in every major passing category.

Age didn’t slow him down, either.

Despite struggling in 2019, Rivers rebounded when he was reunited with coach Frank Reich in Indianapolis. After throwing five interceptions and four TD passes in his first five Colts games, Rivers finished with 22 TD passes and six interceptions over the last 12.

Rivers, an eight-time Pro Bowler, had the second-highest completion percentage of his career (68%) in 2020 while leading the Colts to an 11-5 mark and their second playoff appearance since 2015. And he did it despite playing the final seven with an injured toe on his right foot.

His teammates were upset they couldn’t help him go out by clearing the most glaring omission from his otherwise remarkable resume — a championship.

“The ultimate goal is a Super Bowl and you’ve got a guy playing for 17 years,” two-time All-Pro linebacker Darius Leonard said after a 27-24 loss wild-card round loss at Buffalo. “Adam Vinatieri played 23 years and he has some Super Bowl rings, but Philip doesn’t have any. So you’ve got to continue to work and for us not to give him one this year, it sucks.”

Leonard was hoping Rivers would return.

Reich and Colts general manager Chris Ballard both said they wanted him back, too.

But last week, Ballard said he wanted to take some time to evaluate the season and possible offseason acquisitions and urged Rivers to take time to determine if he would be all-in for 2021.

Rivers finally decided it was time to leave.

He already has a day gig lined up, becoming the head coach of St. Michael Catholic High School in Fairhope, Alabama, where he hopes to coach his sons just like his father coached him.

And where those children may perfect the motion Rivers made famous.

“My son never did throw a big ball like I did at that age and he throws it the exact same way,” Rivers said. “He throws it the same way and anytime I try to tell him, he says, ‘Dad, you throw it that way.’ So I’ve left him alone also.” 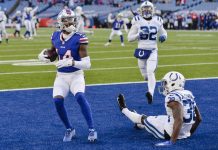 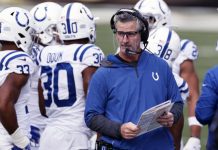 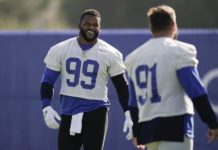