Educators and scientists and medical experts should decide if playing high school football is safe during the pandemic.

You know that COVID-19 is serious business when the Texas University Interscholastic League decided to push back the start of practices for the big football playing high schools in the state until September 7th at the earliest. But not all Texas high school football has been put on ice until then. The smaller high schools can put teenagers, children on the gridiron in August. The thought, of course, being that teenagers are not going to suffer long term effects from COVID-19. At least politicians who have assumed the roles of doctors and scientists despite in 99 percent of the cases not having anything more than a biology class in their backgrounds have quickly stated their opinion. Volleyball also falls into the do not play category at the big high schools until after Labor Day in Texas. Other sports will start almost on time. But high school football is king in Texas and the delay of the football season is a big deal. But all the high schools in Texas will play a full schedule some will not start on time though.

While the debate rages on just how to operate the kindergarten through 12th grade schools in the midst of a pandemic continues, it is clear that sports is a problem. The California Interscholastic Federation won’t have fall sports. Nor will New Mexico. In the state of Washington most of the traditional fall sports will eventually take place with a later start but football will not begin until the spring of 2021. Florida is on the list of states that does not want to interrupt the school calendar. The Georgia High School Association also wants a full slate of games in the state although games will start two weeks later than originally planned. There are those in Ohio who want to see high school football in the fall. The games must go on.

Fans banned at Olympics; Tokyo under a state of emergency 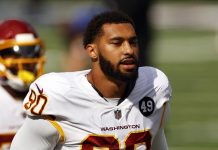 Sweat against Washington persuading players to get the COVID vaccine