Dallas, TX (AP) The Dallas Cowboys will play host to the Seattle Seahawks in round one of the NFL Playoffs. There is no question that Dallas wants to get a playoffs win because it has been a long time since we have heard “How about those Cowboys.”

STREAKS, STATS AND NOTES — Only other playoff meeting was 21-20 Seahawks victory in Seattle during 2006 season when Tony Romo botched hold on snap of potential go-ahead field goal with 1:19 remaining. Previous postseason appearance for both teams came in 2016, with both losing in divisional round. … Seventh playoff appearance for Seahawks in nine seasons under coach Pete Carroll, six in past seven with QB Russell Wilson. … Matchup features two of top six QBs in wins in first three seasons of career: Wilson is first with 36 from 2012-14, Dak Prescott tied for fifth with 32. Wilson, Prescott tied for most 100-plus rating games in first three NFL seasons at 24. … Seattle first team with 1,000-yard rusher and three with at least 300 yards since 2001 Steelers. … Seahawks led NFL with plus-15 turnover margin, with 11 giveaways tied for third fewest in league history. … Wilson tied for third in NFL with 35 TD passes, ranked third with 110.9 rating. He had club season record of seven games with at least three touchdown passes. He has 2-0 record vs. Prescott with four TDs, no interceptions, including 21-12 win in Week 16 last season that eliminated Dallas from playoff contention. … RB Chris Carson led team with 1,151 yards rushing, club’s first 1,000-yard rusher since Marshawn Lynch on Seattle’s most recent Super Bowl qualifier in 2014. … WR Tyler Lockett led team with career highs in catches (57), yards receiving (965) and TDs (10). … WR Doug Baldwin has 24 receptions, 266 yards, two touchdowns in past three playoff games. … LB Bobby Wagner made fifth straight Pro Bowl, has at least 100 tackles in all seven seasons. … Frank Clark (14) and Jarran Reed (10 1/2) had career highs in sacks. Combined 24 1/2 sacks were most for Seattle teammates since Mike McCrary and Mike Sinclair had 26 1/2 in 1996. … Rookie P Michael Dickson set franchise record for average (48.2 yards) and net average (42.5). … Cowboys tied with Packers, Patriots for second-most playoff wins with 34, two behind Steelers. Cowboys will pass Steelers for most postseason games with 62. … Cowboys with three NFC East titles in past five seasons under Jason Garrett. With firing of Marvin Lewis in Cincinnati, Garrett only coach among top six in tenure with current team (8 1/2 years) without Super Bowl title. … Dallas has lost three straight to Seattle, with one touchdown total. … Cowboys have won both wild-card games in 10 seasons at AT&T Stadium, are 7-1 at home this season. … Prescott had career high with 3,885 yards passing, has six TDs rushing in each of three seasons. … RB Ezekiel Elliott led NFL with 1,434 yards rushing, was second with 2,001 yards from scrimmage. He joined Earl Campbell, Eric Dickerson, Emmitt Smith, Edgerrin James as backs to win at least two rushing titles in first three seasons since 1970 merger. Elliott set franchise record for catches by running back with 77, one more than Herschel Walker in 1986. … Cowboys were 29th in yards passing in seven games without WR Amari Cooper, 11th in nine games after acquiring him for first-round pick in trade with Oakland. … Backup T Cameron Fleming, in first season with Cowboys, has most playoff experience on team with nine games. Went past four seasons with Patriots, winning two Super Bowls. … Two-time Pro Bowl and 2016 All-Pro LB Sean Lee played just one playoff game in first eight seasons. … LB Leighton Vander Esch set club rookie record with 176 tackles, according to coaches’ count. … DE DeMarcus Lawrence led team with 10 1/2 sacks in second straight double-digit sack season, earned second straight Pro Bowl. He has two sacks in three career playoff games. … K Brett Maher set franchise record by 6 yards with 62-yard FG and was 6 of 7 from at least 50 yards, but just 13 of 19 from 30 to 49. 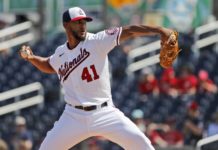