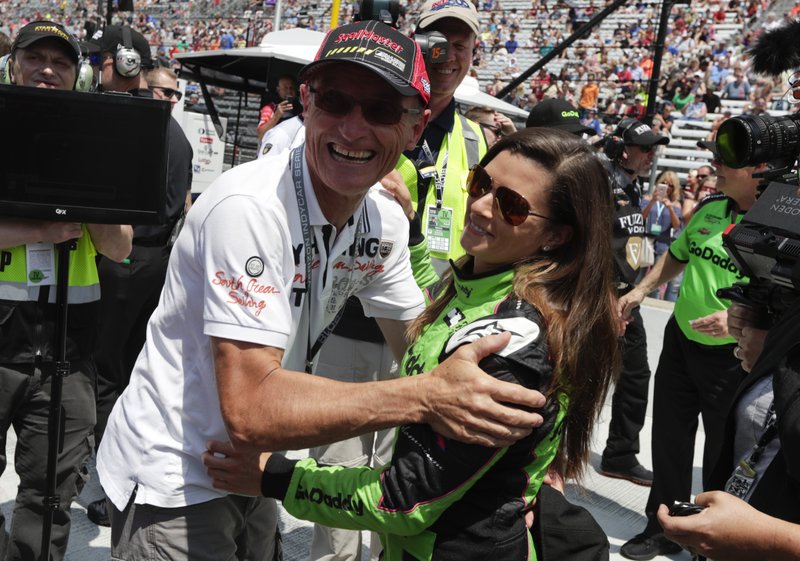 INDIANAPOLIS (AP) — IndyCar’s marquee names turned a day of qualifying for the “Greatest Spectacle in Racing” into a throwback, nail-biting, bumping affair.

Helio Castroneves, seeking a redemptive record-tying fourth victory, was fastest around Indianapolis Motor Speedway. Danica Patrick was fast, too, and she averaged 227.610 mph to snag the ninth and final spot in the next round of qualifying, the Fast Nine. But this was a full field for the first time in years, and it meant two drivers weren’t making next Sunday’s show.

Never did the renewed bumping expect to be a threat to James Hinchcliffe, one of IndyCar’s top drivers, a popular Canadian, and a celebrity from his stint as runner-up on ABC’s “Dancing With the Stars” show.

Add in this is the final Indy 500 on ABC, ending a partnership that started in 1965 and is second in sports only to CBS and the Masters. The network has been a strong partner for tiny IndyCar, and it helped turn Hinchcliffe and Castroneves into crossover stars.

And no one expected trouble for Pippa Mann, a perennial presence in the Indy 500. The British driver spends her entire year working to raise the money to run the Indy 500.

Yet after a day of bumping, it was Hinchcliffe and Mann who were surprisingly sidelined.

“It was devastating in every way possible,” said Hinchcliffe, who is fifth in the IndyCar standings and a full-time series racer for an anchor team. “We came here with big expectations and high hopes. We didn’t have Fast Nine speed but we didn’t think we’d miss the race.

Hinchcliffe nearly lost his life at Indy in a 2015 crash in which he was pierced in an artery and would have bled to death if not for IndyCar’s standard-setting medical staff. He missed the race that year, but otherwise is a staple of the series.

Mann is a one-off. Without her in the field, the Indy 500 will have just one woman, Patrick, at the time her return to American open wheel’s crown jewel event is being celebrated. Patrick is retiring after this Indy 500, her first since 2011 because of a brief and unsuccessful move to NASCAR. Back for the second leg of a farewell in “The Danica Double” she’s bookended Indy with the Daytona 500 on a two-race goodbye tour.

There’s a chance IndyCar could intervene. The standard is 33 cars, but the Indy 500 is the only race that matters to the IndyCar elite and it had a 35 car field in 1997. So the hand-wringing could be real as purists wonder if Tony George, head of the family that owns all things-Indy, can force an exception to get Hinchcliffe and Mann in the field.

“Should they just start everyone? To me, I’m definitely a traditionalist,” said Ed Carpenter, son of George and the owner of Patrick’s car. “As tough as it is to watch a guy like Hinch, who has had great moments here, really tough moments, I feel for him, I feel for Pippa. We’ve all worked very hard to be here. I really feel for them.

“At the same time, Indianapolis, that’s part of the lure of what makes this race so special and important to all of us. Growing up around this event, seeing years where Team Penske struggled and missed the race, Bobby Rahal missed the race one year, it’s happened to great teams.”

What happens with Hinchcliffe and Mann next is anyone’s guess. Hinchcliffe has the sponsorship that could likely buy someone’s seat. Mann needs a miracle in the field being expanded. Hinchcliffe understood options were being explored, but wasn’t asking for favors.

“Nobody screwed us. The system didn’t fail us. We failed us,” Hinchcliffe said. “We just have to do better. I know this team is capable of better. We are better than this, I know that. Everybody in the garage knows that. We deserve to be in this race. Just not this year.”

Meanwhile Patrick would have been content qualifying with something in the middle of the pack. Instead, her four-lap average around the track earned her a slot among the nine drivers who will shoot it out Sunday for the pole. Her Chevrolet from Carpenter is fast, and Carpenter was second only to Castroneves. She’s now guaranteed a starting spot in the first three rows of her final Indy 500.

“I have high expectations for doing well here,” said Patrick, the only woman to lead laps in the Indy 500 and Daytona 500. “But to think that I was going to come back and be in the Fast Nine right off the bat, I mean, I’m going to tell you … I definitely am relieved.”

It was jubilation for Castroneves, who posted the best four-lap average of 228.919 mph to make a statement in the Penske Racing “Yellow Submarine.” Castroneves is a wildly popular Brazilian seeking a record-tying fourth victory. He’s been sidelined to sports cars this season by Penske, but he’s back home again in a car as bright and familiar at Indy as Castroneves’ yellow suit from his winning stint on “Dancing With The Stars.”

He’s a threat to win the pole, and maybe even the race.

Over the last 17 years, he has turned Indy’s tricky 2.5-mile oval into his personal proving ground. In addition to the three wins, he’s won four poles and had three runner-up finishes with Roger Penske’s powerhouse team.

All three of Castroneves’ teammates — 2016 series champion Simon Pagenaud, 2014 series champ Will Power and defending series champ Josef Newgarden — made the final nine. Pagenaud was third at 228.304, Power was fourth at 228.194 and Newgarden was seventh at 228.049.

Scott Dixon and Sebastien Bourdais are the only Honda drivers in the shootout. Bourdais, who drives for Dale Coyne Racing, was fifth at 228.090. Dixon, of New Zealand and the star for Chip Ganassi, was eighth at 227.782.