Saturday at 4 pm coach Deion Sanders will lead his undefeated 11-0 Jackson State team against Southern in the 2022 Southwestern Athletic Conference Football Championship Game with the winner going to Atlanta on Dec. 17th for the Celebration Bowl. Then Sunday multiple reports have him deciding if he will stay at Jackson State or move on to Cincinnati, Colorado, or the University of University of South Florida.

Sunday is important because on Monday Dec. 5th the first day of the 45-day college football Transfer Portal begins and that is going to be a key time for all of the schools who need a head coach in place. So, if Sanders is staying at Jackson State or making a move it is important say something.

As of this moment, only Colorado has confirmed that they have made coach Sanders an offer, both Cincinnati AD John Cunningham and USF AD Mike Kelly have stayed quiet on the subject noting that their coaching search process continues. USF has been linked to Coach Prime since the beginning of its search to replace Jeff Scott, meanwhile, Cincinnati’s sudden entrance in the Sanders sweepstakes seems to have come out nowhere as they seek to replace Luke Fickell.

So, as a proud USF alum and someone who as a producer and director of sports for over 40 years, I have had the pleasure of doing games where Sanders has played both in college as well as the pros, I would like to give my pitch why coming to USF would be a good match for him and of course USF. I have listed 10 but there could have been a hundred reasons why coming to USF is the best choice Coach Sanders including a chance to land in a Power 5 conference in the next round of expansion.

At the end of the day whoever is lucky enough to land Coach Sanders is going to get an outstanding football with the chart media skills. I know that leaving Jackson State would be hard for him because of the revival of the HBCU football, something he has been an important part of but should Coach Sanders make the move to USF he will know it is a place that really needs his mad skills.

Sanders confirms the Colorado HC offer but say’s that they “are not the only offer he has gotten.” 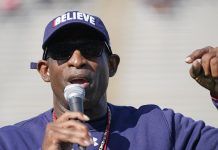