LOS ANGELES (AP) — The Los Angeles Dodgers have canceled Trevor Bauer’s bobblehead night and pulled his merchandise from their team stores in the wake of allegations of sexual misconduct against the Cy Young Award-winning pitcher.

The Dodgers confirmed the moves Wednesday, saying in a statement that the team “did not feel it was appropriate” to have a bobblehead night or to sell Bauer merchandise “while investigations continue by Major League Baseball and the Pasadena Police Department.”

Fans at Dodger Stadium had been scheduled to get their first bobblehead doll of Bauer on Aug. 19. Merchandise featuring his name or likeness is no longer available in the Dodgers’ team stores or the club’s online shop.

Pasadena police and MLB are both investigating the allegations made against Bauer by a Southern California woman who says the pitcher choked and punched her during two sexual encounters earlier this year. The woman obtained a protection order against Bauer last month under the Domestic Violence Prevention Act.

Bauer’s co-agent has claimed his client’s interactions with the woman were wholly consensual. A hearing related to the protection order is scheduled for July 23.

Bauer agreed to a $102 million, three-year contract to join his hometown Dodgers earlier this year after winning his first Cy Young with the Cincinnati Reds last season.

He was placed on a seven-day paid administrative leave by MLB last Friday, and manager Dave Roberts has said the Dodgers do not expect Bauer to return to the team after the seven-day period ends. The Dodgers already are planning their rotation past the All-Star break without Bauer, who is 8-5 with a 2.59 ERA in 17 starts this season. 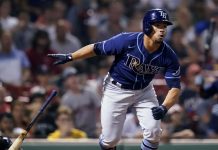 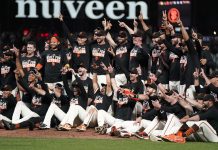