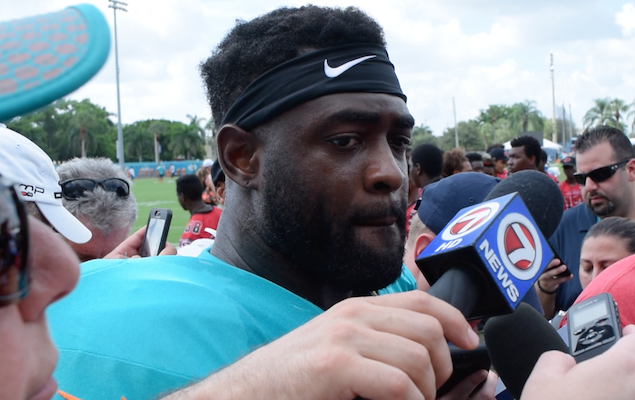 Reshad Jones entered training camp on the non-football injury list as a result of a calf injury he sustained while working with his trainer prior to camp. On Wednesday, Jones practiced without limitations for the first time in nearly eight months and was excited to be back out on the field in pads with his teammates once again.

“It felt good to put pads on. I haven’t had the pads on in a while,” Jones said. “It feels good to be out here and run around with my teammates and get my feet wet a little bit.

It was straight go. Like I said, it felt good for me. It’s been seven or eight months since I’ve had pads on. It’s a fun experience. It feels good.”

Jones expressed that the calf injury was minor, but the team wanted to be cautious in an effort to keep their Pro Bowl safety healthy for the duration of the 2017 season. However, it is clear, Jones didn’t just sit around during his downtime; he made certain to come back in tremendous shape.

“He went through . . . did the conditioning test. He crushed that,” Gase said. “When we talked after the walk through, he felt like he was going to be ready by . . . The biggest question for him was just shoot me straight. Don’t just be trying to run out there just so you can so you’re off PUP. You’re out there, you’ve got to be honest with us.

“He legitimately felt really good and probably did a little more than I expected. I think it’s just hard with him because it’s not going to be . . . There’s no middle ground with him with him. It’s like ‘Hey, either I’m going or I’m not.’ But he looked good. He was moving good.”

At one point during  practice, Gase even joked with Jones about moving him to linebacker because of his physicality.

The Dolphins have another physical safety in the fold with T.J. McDonald, whose hit on Jay Ajayi during Monday’s team period of practice famously forced the Pro Bowl running back out of the lineup and into concussion protocol. While McDonald will be suspended for the first eight games of the season for violating the NFL’s substance abuse policy, he’s still battling for a starting position.

With the possibility of McDonald starting in next to Jones, Gase is very excited to have Jones off of NFI and back in the lineup working next to McDonald.

“…It’s nice to get him out there so those guys can get used to playing with each other,” Gase said. “Any time that we can get – whoever that 11 is going to be on the field – as many reps as possible together, the communication factor, getting used to hearing everybody’s voice, especially at safety, because you’re making certain kind of calls.

“Guys, they’ve got a certain job; but some guys fill in faster in the run game compared to other guys and there’s . . . Everybody kind of knows what our strengths or weaknesses are, how we can kind of either compensate or cheat it a little bit. So any time we can get those guys playing together, its value.”