According to reports, the Miami Dolphins are working out Oklahoma quarterback Baker Mayfield today. The Dolphins, who also attended Mayfield’s Pro Day workout last week have not been shy about their interest in Mayfield.

Unfortunately for Miami, Mayfield has plenty of suitors, and it looks as though they will need to trade up from their No. 11 pick in April’s draft to land the Heisman Trophy winner.

The chances of the Dolphins landing a quarterback at pick No. 11 became increasingly slimmer when the quarterback-starved New York Jets traded picks No. 6, 37 and 49 with the Indianapolis Colts to move up to pick No. 3.

Mayfield has reportedly has a workout scheduled with the Jets on Saturday and has already worked out for the Buffalo Bills, who have the desire and resources to trade up from pick No. 12 to select a quarterback.

The Dolphins, who need a contingency plan for veteran quarterback Ryan Tannehill who is returning from ACL surgery would like to take a quarterback early in the draft. However, after quarterbacks Josh Rosen, Sam Darnold, Baker Mayfield, there’s a perceived drop off in talent at the position.

For a quarterback room that consists of Brandon Doughty and David Fales as its current backups, adding talent at the quarterback position has become a top priority for the Dolphins.

Mayfield, often lauded for his accuracy completed 70.5 percent of his passes while racking up 4,627 yards and 43 touchdowns against just 6 interceptions in 2017. Mayfield also set the NCAA record for passing efficiency with a passer rating of 198.9.

Mayfield’s strength is certainly his accuracy but he’s not the perfect prospect by any stretch of the imagination. He’s been described by scouts as a “spot thrower” meaning he has to see targets come open as opposed to throwing receivers open. While his arm strength is good enough, there are questions as to whether he’d be as effective as a passer in inclement weather.

In the AFC East, Miami plays games in Buffalo, New York and New England. For a player who has questions with regards to arm strength, the Dolphins must determine whether or not his strengths warrant parting ways with resources to trade up for him. 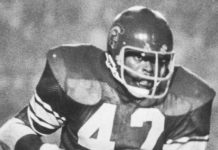 43 Years ago today the Buccaneers drafted Ricky Bell at the No.1 overall choice over Tony Dorsett. Was it really a bad choice or...

Where Is The Pay Television Money Earmarked For Sports Going?