Firestone has a long history in the Tampa Bay area.

The Firestone tire company has been around all aspects of motorsports since there were cars. This is their fourth year at the title sponsor of The Firestone Grand Prix of St. Petersburg and they have been a part of the Tampa Bay area since they opened their first tire store in 1933.

LISTEN TO THE FIRESTONE GP OF ST.PETE ON THE FLAGSHIP STATION FOR THE RACE OUR OWN WHBO 1040 AM – SPORTS TALK FLORIDA

I spoke with Firestone experts Lisa Boggs, Director of Bridgestone Americas Motorsports and Dennis Boley, the Senior Project Engineer for Firestone. Both are on the ground in St. Petersburg as the tire company has a team of people who are involved in every one of the IndyCar race series events.

There are a couple of types of tires that you will see on the IndyCars in St. Petersburg and other tracks. For instance, at the Grand Prix of St. Petersburg where they will be using “soft tires.” The tires have a softer compound than primary tires, allowing for faster speeds and better cornering, but quicker wear.

These are the types that are used on road and street tracks only.

Meanwhile, there are another tires used on the oval tracks that are different types of tires and are more suited to that style of track.

Here is our podcast with Team Firestone.

Today’s race will begin with Team Penske on the poll with Will Power posted the fastest lap of the day. He roared around the course in just 1 minute, 1.0640 seconds (106.118 mph), sealing his 45th career Indy car pole, which is good enough for fifth all-time. The 2014 Verizon IndyCar Series champion will look for his third win at the circuit come Sunday.

“It takes obviously a very good team and kind of getting through that first round there,” said Power, whose lone lap in the opening of three knockout qualifying segments was quick enough to advance while also saving his Firestone alternate tires for the final round, the Firestone Fast Six. 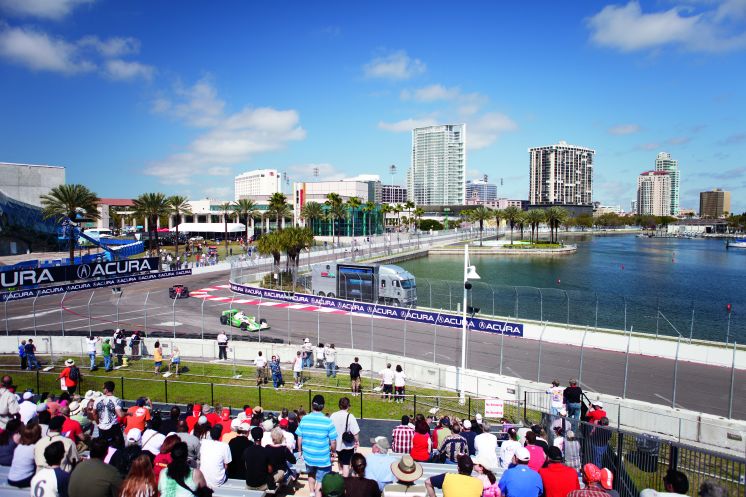 Chip Ganassi Racing’s Scott Dixon (No. 9 GE LED Lighting Honda) appeared to be the driver to beat for the majority of the weekend, leading the second practice Friday and this morning’s session, where he posted a lap of 1:01.6240 (105.154 mph). Dixon also paced the first two segments of qualifying, but admitted a mistake on his flying lap of the Firestone Fast Six ended his chances at the Verizon P1 Award.

Following Dixon on the grid were 2013 St. Pete winner James Hinchcliffe (No. 5 Arrow Schmidt Peterson Motorsports Honda), whose best lap of 1:01.3039 (105.703 mph) earned him his best start at St. Pete. Also achieving his best qualifying position at the track was Josef Newgarden (No. 2 Verizon Chevrolet), who will start his first race for Team Penske from the outside of Row 2.

Andretti Autosport’s Takuma Sato amended for a rough Friday, which saw him tag the Turn 13 barrier in practice, by qualifying his No. 26 Andretti Autosport Honda in the top five in his debut with the team.