Sports Talk Florida – N
Listen Now WHBO AM 1040
Listen Now WWBA AM 820
Home MLB Miami Marlins If you are lucky you will have a real friend that can...
Facebook
Twitter
Pinterest
WhatsApp

The real joy of being a sports fan is the ability to share stories with a close friend. Someone who has the same level of passion that you have about the same teams.

For me, that friend is Art Isack who is older than me and who along with his lovely wife Harriet has been part of my and my wife Susan’s life for over 21 wonderful years. They are two very special people who are more like family than just friends.

By the way, Art would always tell me how lucky he was to be able to marry his best friend who also happened to have been a college cheerleader he would say with a wink.

Art is a family man who after retiring over a decade ago from being a successful businessman transitioned into a person who went out of his way to be a volunteer to so many good projects there is not enough room in this column to list them.

His knowledge of sports and more to the point those teams in Washington was nothing short of amazing. It was a true joy to trade sports stories with Art on all areas of sports.

Speaking with Art about his beloved Redskins was a treat because of his depth of knowledge and love for the team. It was like taking a Master Class in Washington football history from someone who was a man who loved to go to games with his son Michael for decades meanwhile, his daughter Suzzie would be home with her mom for much needed moral support.

Over the last decade, our focus changed from football to the Capitals and the Nationals two teams that would have great regular seasons only to beak our hearts in the playoffs falling short of winning a title.

Our love and support for the Caps paid off in 2018 when they finally broke through and won The Stanley Cup in an exciting way over Vegas. His son in law Mitch was able to work things out with the Caps to give Art a chance to ride the Zamboni at the Capital One Arena in Washington, something he was very proud of and loved sharing the video of his trip around the rink.

In 2019 Art and the illness that he had been battling for years was getting increasingly worse. That made each phone call and get together became far more important and meaningful each time we spoke. We needed some good news to get us through the hard times.

The sports gods came though this past summer with a baseball season that melted into the fall where Art and I really had the most fun as we have had in our 21 years of watching D.C. sports together. The run to the playoffs and finally to a World Series title by the Nationals was just what the doctor ordered.

We both watched the games on MASN with Bob Carpenter and F.P Santangelo all the way. But there were nights that watching TV gave way listening to Charlie Slowes and Dave Jageler on the Nationals Radio Network who always did a great job of closing out the Curly W’s.

Art and I broke down the entire run in real-time as we lived and died with every game from late August to the end of October. The morning after the Nationals win in Game 7 of the World Series, Art and I spoke like two 10-year-olds who had just won our Little League title.

There was a sense of joy and fun for what we had just seen after a two and a half month rollercoaster ride that we didn’t want to see it end. But it was a storybook ending and after all what more could we have asked for?

On the Sunday before Thanksgiving, my wife Susan and I  went to Art’s home to have lunch with him and his lovely wife (and did I mention former cheerleader) Harriet. I proudly wore for the first time my new Nationals World Championship shirt while Art donned his very cool World Series hat.

While our wives talked Art and I watched the Redskins blow another lead and lose to Detroit. That was the last time I saw my friend.

His illness caused our phone conversations to become almost impossible to do as he weakened. He remained positive, kept his sense of humor and was surrounded by his loved family.

Sadly on Friday Art lost his battle with his illness and died. I will miss our conversations, as well as the lunch or dinners that we would have with our wives.

Art was much more than a sports fan he was a loving husband to his wife Harriet. He was a great father to his son Michael Isack, daughter Suzanne Scherr and her husband Mitch along with his beloved granddaughters, Madeline and Isabelle Scherr all were his pride and joy.

He was a man of dedication to his faith, his family and community. My hope is that I can be as good a man as he was, but that is a very high bar to clear.

I will miss him dearly but trust me we will still talk sports. 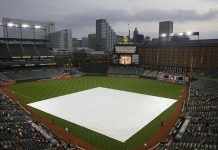 The Baltimore Orioles Moving In 2022? That’s A Rumor