Jacksonville Came Out The Gates Swinging Vs. Pittsburgh, Never Lets Up: The Takeaway

Pittsburgh, PA — Coming off the lowest scoring game in AFC Wildcard history, the Jacksonville Jaguars (10-6) exploded for 45 points against the Pittsburgh Steelers (13-3) in the AFC Divisional Round.

The Jags will play in their first AFC Championship game since the 1999 season.

Jacksonville jumped out to a 21-0 lead to begin the game. Jags’ quarterback Blake Bortles hit his passes early and running back Leonard Fournette seemed to be unstoppable.

But the Steelers fought back with their championship pedigree. Down 21-28, Pittsburgh had all the momentum as they were driving to tie the game with 12:30 left in the fourth.

However, the Jaguars stopped Pittsburgh on fourth and one; scoring on the ensuing drive for another 14-point deficit for the Steelers.

On the next possession, the Steelers faced another fourth down; quarterback Ben Roethlisberger threw a 43-yard dime to receiver Antonio Brown for a touchdown to pull within seven again.

When it mattered most, Bortles navigated an eight-play, 75-yard drive, taking 4:46 off the clock. Jacksonville took a 42-28 lead, a deficit too steep for the Steelers to overcome with just 4:19 left in the game.

It’s time for all the critics and naysayers to take a step back and respect what Jacksonville has achieved. The Jaguars endured an uncanny amount of disrespect this season, all the way up to this week by players from the Steelers.

“You can’t overlook us, and that’s what we took as disrespect: that they were already looking ahead to next week while we were focusing on them,” said Jags linebacker Miles Jack. “It was weird because we had won the last game, and I guess they forgot about that.”

Jacksonville did an excellent job of shutting out the outside noise taking care of the Steelers, again.

On this day, the offense picked up the defense as Jacksonville showed what they are capable of when clicking on all cylinders.

No one has faced more criticism this season than Jacksonville quarterback Blake Bortles. With multiple NFL players calling him “trash” and almost no NFL analyst picking Jacksonville in this game due to Bortles’ history.

Bortles didn’t play great, but the key to Bortles contributing to Jacksonville’s success isn’t touchdowns and yards, its turnovers. The fourth-year signal-caller had none on Sunday, as the Jaguars improve to 10-0 this season when he doesn’t commit a turnover.

Bortles has stretches where he looks great, and others where he looks like he doesn’t belong in the NFL. But as long as he isn’t turning the ball over, the Jaguars will always be in games due to their rushing attack and defense.

“All the guys that cover him know he’s competitive as hell,” coach Doug Marrone said of Bortles. “He’s doing everything he has to do. He was able to run today for yardage. he was able to throw the football and put us in good situations…”

During stretches of the season, they’ve had to carry the offense to win games. But the offense carried their weight and then some, in route to the AFC Championship Game.

However, Steelers’ quarterback Ben Roethlisberger and the Pittsburgh offense lit up Jacksonville’s defense on Sunday. Roethlisberger finished with 469 passing yards and five touchdowns.

Pittsburgh was forced to put the ball in the air often due to the 21-0 deficit in the first half. But defending the pass is the strength of Jacksonville.

It wasn’t like they were schemed to death, such as the San Francisco game. It was “my guy is better than your guy” attitude from the Steelers, and it worked in the second half.

Jacksonville needs to keep the pats on back short-lived this week and focus on the miscues vs. Pittsburgh from Sunday. After all, they will face the greatest quarterback and coach of all time next week.

Up Next: Jacksonville travels to New England to take on the Patriots in the AFC Championship Game. 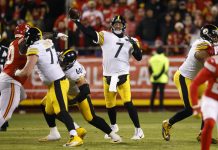 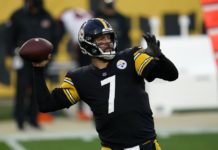 Monday Night Football: “Big Ben,” plays his last home game in Pittsburgh and its against the rival Browns. 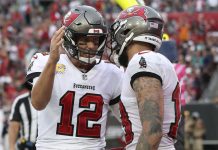 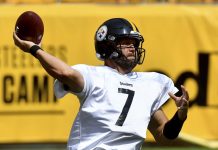 Steelers QB Ben Roethlisberger tells reporters that the Monday night football game vs Cleveland will be his last home game ever.