NEW YORK (AP) — The mystery surrounding the Japanese horse that is the early 4-1 second choice to win the Belmont Stakes has gotten deeper.

Epicharis didn’t train on Thursday, hours after the 3-year-old dark brown colt was treated with an anti-inflammatory for lameness in his right front hoof, calling into question whether he will be fit to run in Saturday’s final leg of the Triple Crown.

The Belmont already lost expected favorite Classic Empire on Wednesday because of an abscess in his right front hoof. The $1.5 million race also is without Kentucky Derby winner Always Dreaming and Preakness winner Cloud Computing. A field of 12 is set to run the 1½-mile race, with Irish War Cry as the early 7-2 favorite.

Epicharis was treated intravenously with Butazolidin, commonly known as bute, on Wednesday night, according to veterinary records from the New York State Gaming Commission. The vet treating the horse cited “possible foot” as the issue.

“He looked a little different favoring his right front yesterday afternoon, so we treated his hoof and gave him bute,” trainer Kiyoshi Hagiwara said Thursday through a translator. “It looks like it’s getting better and I think there is no problem running him in the race. We still have time, so we will give him the best care we can.”

Epicharis walked around his barn on Thursday, two days after he had his last serious workout. Hagiwara is hopeful he will return to the track on Friday.

“When you make such a long trip with the horse, you need confidence in your horse,” said Christophe Lemaire, his French jockey. “For sure, the connections studied the form very well, and the opportunity to come here. If they decided to bring the horse, it’s because they think he’s able to win. I think so too, especially this year with no Derby winner, no Preakness winner. I think he’s got a good chance.”

Last year, Japanese-trained Lani ran in all three Triple Crown races. His best finish was third in the Belmont.

Belmont Park’s sweeping turns and deep, sandy track is similar to those in Japan. However, the 1½-mile distance is a question for every entrant since most horses have never run that far and will never be asked to again.

“A mile and a half is a long way to go, but in his previous races he has shown us some stamina,” Lemaire said. “He should stay the trip.”

Epicharis was undefeated as a 2-year-old in his homeland, winning his first three starts in Japan by a combined 25 lengths. This year, Epicharis won another race in Tokyo before losing for the first time by a nose to Thunder Snow in the UAE Derby in March.

His sire, Gold Allure, is a son of 1989 Kentucky Derby and Preakness winner Sunday Silence.

The colt arrived in New York on June 1 after a 24-hour journey from Japan that included a layover in Alaska. He cleared quarantine last weekend.

Hagiwara trained 2009 Japanese Derby winner Logi Universe, the only Group 1 winner so far in his career. The 58-year-old trainer has never raced in the U.S. before.

There is great interest in Japan surrounding the 149-year-old Belmont, the oldest of America’s Triple Crown races. For the first time, a Triple Crown race will be available for pari-mutuel wagering in Japan through a separate, non-comingled pool.

“Every time a Japanese horse competes abroad, it’s a big event for Japanese fans and the Japanese horse racing world,” Lemaire said. “If Epicharis could win the Belmont, it would be a big shocking wave in Japan. A big tsunami maybe.” 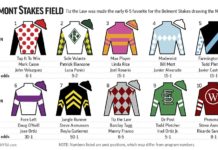 The Belmont Stakes: A Visit To A Time That Has Passed 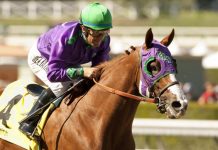