BOSTON (AP) — Jerry Remy, a Boston Red Sox second baseman who went on to become a local icon as a television broadcaster, has died of cancer. He was 68.

The Red Sox confirmed that Remy died on Saturday night. He had a long and public struggle with lung cancer, and drew thunderous applause at Fenway Park earlier this month when he threw out the ceremonial first pitch at a playoff game while using an oxygen tube.

Remy was a former smoker who had a yearslong battle with lung cancer, including surgery for the disease in November 2008. His struggle with the illness was well known to baseball fans. Support from Red Sox fans helped him as he underwent years of treatments for the disease, he told reporters in 2018.

Remy had spent 10 seasons in the majors — the first three with the California Angels and the last seven with Boston — before retiring after the Red Sox released him on Dec. 10, 1985. Remy hit .275 with seven homers and 329 RBIs in 1,154 games.

But it was as a Red Sox announcer, a job he began in 1988, that he captured the hearts of fans. Combining sharp analysis and a sense of humor that sometimes led to long, on-air bouts of laughter involving him and former Boston play-by-play announcer Don Orsillo, Remy gained a legion of listeners.

Remy “left an indelible mark on this club and on an entire nation of Red Sox fans,” Red Sox principal owner John Henry said in a statement Sunday.

“He devoted his entire career to baseball and whether from his seat in the clubhouse or his perch above the field in the broadcast booth, he took generations of rising Red Sox stars and a multitude of fans along for the ride with him,” the statement said.

Known as “RemDawg” by generations of New Englanders, Remy was elected by fans as first president of “Red Sox Nation” late in the 2007 season. The club had decided to capitalize on the passions of followers who were known by that name by creating a formal fan club.

Hall of Famer Carl Yastrzemski, who played with Remy in Boston, remembered his former teammate on Sunday as a “very, very hard worker” and a good friend.

“He made himself an outstanding player. He carried those same work habits over to the broadcast booth,” Yastrzemski said in a statement. 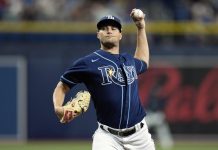