ANAHEIM, Calif. (AP) — The Los Angeles Angels’ two AL Most Valuable Players are both fully healthy. So is their $245 million third baseman.

The Halos’ rotation looks promising, starting with two elite right-handers at the top. Their long-troublesome bullpen looks like a downright strength.

Could this be the year Mike Trout and Shohei Ohtani finally win a playoff game with the perpetually underachieving Angels? Their fans have been burned many times before, but Trout thinks optimism is warranted now that Trout, Ohtani and Anthony Rendon are united in good health.

“I think everybody here is excited to play with Shohei,” Trout said. “Since we signed Rendon (before the 2020 season), I don’t think we’ve played with a full lineup that many times. Obviously, it’s going to be different this year, and it’s exciting.”

Trout appeared in only 36 games last year before he was sidelined in mid-May by a baffling calf injury. Rendon managed to play in only 58 games due to a variety of ailments, many related to a crippling hip injury, and he didn’t play again after midseason.

Ohtani played all season — and he played spectacularly. He will be on the mound and batting leadoff when the Halos open the regular season April 7 hosting AL West kingpins Houston.

All three sluggers are healthy and bolstered by a lineup that includes David Fletcher, All-Star first baseman Jared Walsh and veteran Justin Upton. Manager Joe Maddon is impressed by his lineup’s potential, but also knows health will be paramount.

“We need to keep our guys on the field to truly see the potential of this group,” Maddon said.

Reid Detmers is hoping to land the sixth rotation spot.

Syndergaard is ready to unleash the thunder after two years largely spent on the sidelines.

The Angels signed the 29-year-old former Mets ace nicknamed “Thor” to a one-year, $21 million contract as their biggest offseason acquisition.

Syndergaard has thrown only two innings in the big leagues over the past two seasons while returning from Tommy John surgery, but he is throwing without restrictions. He has no innings limit, although the Halos’ six-man rotation provides a built-in buffer.

“Coming off two years of not pitching, and this being arguably the most important year of my career, I just need a lot of stress off my shoulders,” Syndergaard said. “Joe has an awesome clubhouse, and it’s a lot of fun and loose, but it’s definitely time to get down to business.”

The Angels didn’t sign a big-name shortstop in the offseason, leaving the position to be filled by several candidates.

Wade and Velazquez are candidates, as are returnees Luis Rengifo and Jack Mayfield. Maddon also could move Fletcher to shortstop from second base. No matter what happens, the position appears primed for a midseason upgrade if the Angels turn out to be a playoff contender.

The Angels’ bullpen has been their weakness for years, but general manager Perry Minasian has taken another shot at getting it right.

After signing Loup and paying top dollar to re-sign excellent closer Raisel Iglesias before the lockout, Minasian snagged Bradley and Tepera earlier this month. They’ll join holdovers Mike Mayers and Austin Warren in a group that would be taking a huge step forward from previous Angels bullpens if it even turns out to be average. 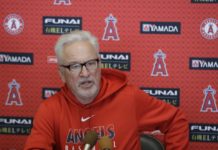 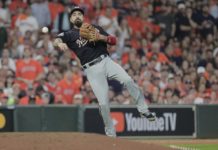 Joe Maddon gets an early Christmas gift: Angels get Anthony Rendon in a $245M, 7-year deal