What is the Kentucky Derby?

Kentucky Derby is a horse racing sports event that commences every first Saturday of May annually. This prestigious American event runs at Churchill Downs in Louisville, Kentucky. It draws a crowd of 155,000 spectators, more or less, annually. It is also one of the sports events to bet for. If you are interested in wagering on your favorite horse, you can go to racebooks for useful tips.

The Beginning of Kentucky Derby

The history of this sports event begins way back in the 1870s. In one of his travels, Colonel Meriwether Lewis Clark attended a derby in Europe and got inspired to create a horse racing event back at home in Louisville, Kentucky. His uncles gifted him land to develop a racetrack on, and he also organized the Louisville Jockey Club together with other local horse race fans to raise funds.

With 10,000 spectators, the very first Kentucky derby was launched on May 17th, 1875. The Louisville Jockey Club sponsored it, and its very first winner is Aristides, who raced 1.5 miles along with the fifteen horses to compete.

A lot has changed in Kentucky Derby’s history over the years that made it “The Kentucky Derby” of today. One notable change is the Derby race’s distance and the number of participating thoroughbreds. They reduced it from 1.5 to 1.2 miles and from fifteen horses to twenty horses. Below are some important events in the Kentucky Derby History

The name “Churchill Downs” was first used in 1883 to landmark the Kentucky Derby racetrack. And in 1986, the Churchill Downs Racetrack was registered in the National Historic Landmarks. But things changed after the Twin Spires was constructed.

Joseph Dominic Baldez was asked to draw the blueprint for the new grandstand in Churchill Downs. The twin spires were originally not included in the design, but he felt that something was missing in the design structure as he continued working. That is why he added the Twin Spires. The Twin Spires was constructed and greeted the crowd in 1895. Since then, it became a recognized landmark of the Kentucky Derby.

The idea of a triple crown started in 1919. It is when sir Barton won four events, including the Kentucky Derby, in 32 days. In 1930, they officially used the term Triple Crown. The triple crown is the most difficult accomplishment in horse racing. The only way to achieve the Triple crown, a thoroughbred must win three events. To date, only thirteen horses have achieved the Triple Crown.

The Kentucky Derby is not just a horse racing event. It is famous for its fancy activities and galas; its fashion fun shows the southern style, especially the fancy hats; and let’s not forget the refreshing mint juleps served over the derby’s two-day period. But before talking about traditions, let us first tell you how the race works.

How does the race work?

You can’t just go into any sports events without knowing how it works, right? Horse racing has always been a global sport, so is the Kentucky Derby. But being a horse alone is not the only qualification to join the event. Scroll down, and we’ll answer some of your questions.

What horse is qualified to be in the game?

The Kentucky Derby is literally a once-in-a-lifetime sports event for horses because only three-year-old thoroughbreds can join the race. The competition is fierce, and that makes winning a really big deal for the 2021 contenders.

How to be qualified?

To qualify for the final game. The horses must join the prep race and gain points. Now, what is a prep race? A prep race is a series of competitions before the Kentucky Derby and is done from September to April. It helps horses qualify as one of the 20 horses to compete in the final race. 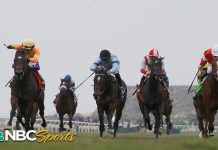