Cleveland (AP) – King James is on the hunt again. Maybe, LeBron James heading to free agency is just a ploy to make the Cavs sweat while the rest of the league thinks

Will he stay in Cleveland? Head back to South Beach and play with the Heat? Explore his creative side in Los Angeles? Stun the world by heading to Philadelphia? then there is Houston and San Antonio where he could land.

James told the Cavaliers that he is not exercising his $35.6 million contract option for next season and will become an unrestricted free agent, two people familiar with the decision told the Associated Press on Friday.

The decision to decline the option for 2018-19 was expected by James because it gives him more options, which includes him re-signing with the Cavs, who can offer him the most money — a five-year, $209 million contract. James can also sign a short-term deal with Cleveland, something he has done each year since returning in 2014.

James had until 11:59 p.m. to express his intentions to the Cavs and his agent Rich Paul informed the team in the morning, said the people who spoke on condition of anonymity to the AP because the sides are not publicly commenting on moves ahead of free agency opening Sunday.

The three-time champion is now the most coveted prize in an NBA free-agent class that includes All-Stars Paul George and Chris Paul. Teams can begin negotiations with free agents at 12:01 a.m. Sunday.

The fact that he didn’t pick up his option could be good news for worried Cavs fans, who fear James may leave them for the second time in his career. If he had opted in, it would have likely meant the Cavs had worked out a trade for James.

And while the Cavs remain hopeful he’ll stay, there are other teams in the mix for the 33-year-old — and the Los Angeles Lakers appear to be at the top of the list.

With the ability to sign two maximum-contract players, the Lakers can build a “Super Team” with James if they are able to also land George or work out a trade with San Antonio for Kawhi Leonard. On Thursday, George told the Oklahoma City Thunder he’s declining his $20.7 million option for next season.

James already has some shallow roots on the West Coast with two homes in the Los Angeles area and a film production company.

The chance to join one of the league’s most iconic franchises has an appeal to James and he said following this year’s Finals that he remains in “championship mode.”

The Philadelphia 76ers and Houston Rockets are also believed to covet the four-time league MVP, who just played in his eighth straight Finals.

James will factor family — he has three children, and his oldest son is a rising hoops star — into the choice of where he plays next.

James just completed his 15th NBA season, and it may have been his best yet.

He played all 82 regular-season games for the first time, averaging 27.5 points, 8.6 rebounds and a career-high 9.1 assists per game. He showed no signs of slowing down, if anything he had found a new gear.

James then carried the Cavs, with their flawed roster after a massive trading deadline turnover, through the Eastern Conference playoffs — they survived two Game 7s and swept the top-seeded Toronto Raptors — to the NBA Finals for a fourth straight meeting with the Golden State Warriors.

It was James’ eighth consecutive Finals appearance, a remarkable feat not matched since Hall of Famer Bill Russell and a handful of Celtics did it in the 1960s. Cleveland was overmatched but James had the Cavs in position to steal Game 1 before a late-game missed free throw by George Hill and mental meltdown by Cavs forward J.R. Smith, who dribbled out the final seconds of regulation thinking his team was leading, led to an overtime loss.

With MVP Kevin Durant heading the charge, the Warriors completed a sweep of the Cavs and James, who revealed following the series that he had broken his right hand in a fit of frustration following Game 1.

James had numerous reasons to be upset. He had done everything possible, and as he left Quicken Loans Arena following Game 4 along with his sons, there was an air of uncertainty heading into this summer.

Those unknowns remain, but James is closer to solving them. 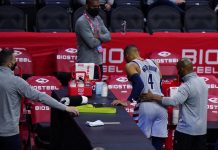