There are more and more reports that San Diego Chargers owner is ready to take the NFL’s offer and move his franchise to Los Angeles when the deadline for moving to Los Angeles in January approaches. If that happens, the franchise returns to the place that Barron Hilton placed it in 1960. Hilton took his team to San Diego after just one year in Los Angeles.

For nearly 17 years, the Chargers franchise has been in turmoil because of a conversation between me and then owner Alex Spanos. A little inside information here goes a long way and it also will show how the whole ordeal started on Match 29, 2000.

“I turned on my laptop Tuesday and checked my e-mail. There was a message from a reporter from the North County Times, the second-largest newspaper in terms of circulation in San Diego County. It was in reaction to an article I wrote Sunday concerning San Diego Chargers owner Alex Spanos.

“Spanos told me he wanted a new stadium, which really isn’t all that much of a revelation. It seems it just “caught” everyone, including son Dean Spanos, by surprise. It also became a major topic of conversation in San Diego, hitting the front page of the San Diego Union-Tribune, and my TodaysSports.com column became the story for a little while.

“Most owners want the newest, biggest and best facility, regardless of whether it is baseball, basketball, hockey or football.

“Of course, I was just a “website” writer in some of the articles, which I guess some print sportswriters and public relations people perceive as the lowest form of life in terms of writing. But their awry perception is their problem.

“I actually talked to Spanos because I was looking to find out what was happening at the NFL Owners Meetings and the conversation turned to whether or not the owners would discuss stadium situations in Tempe, Philadelphia, New Orleans and Minneapolis. Spanos said he was sure they would. I then asked whether he was happy with his situation in San Diego and he responded.

“He wanted a new stadium.

“The conversation never included anything about the Chargers moving and as a follow-up, mindful of an empty market in Los Angeles, I asked about Los Angeles in general and whether or not L.A. will get a team in the near future. I never inquired about Spanos’ future plans or whether or not he would be inclined to move. In fact, Spanos emphatically told me, “We love San Diego” and ”winning helps”. At no time did he threaten to leave the city.

“So 48 hours later, I received an e-mail from the North County Times writer Steve Scholfield, asking me some personal information about myself. Mr. Scholfield wrote that his readership wanted to know more about me.

“That was kind of strange, I thought. I am just the messenger. Then I looked up the San Diego Union-Tribune, and it hit me. This story began to take on a life of its own. The column created an issue for the 2000 San Diego Mayoral campaign, and reporters wanted to know more about me. Journalism 2000. The messenger was the story.

“I responded to Mr. Scholfield by e-mail regarding how I asked Mr. Spanos for a few minutes of his time and went over the questioning.

“The Associated Press office in San Diego asked me much the same questions. I found out by reading the San Diego Tribune article, which supported my story, that Spanos did not deny what he told me. In fact, Spanos added to the story attributed to TodaysSports.com.

“I’ve never thought for a minute that we couldn’t get something done, honestly,” the Union-Tribune quoted Spanos as saying to “the online service.

“I’ve always thought we would be able to get one. If the Padres can get a stadium, why can’t we?”

“In fact, Spanos did not say this to me in the course of our interview, but if the Union-Tribune got the quote from Spanos and wrongly attributed it to TodaysSports.com, it still supports the original story.

“From the North County columnist and from Bernie Wilson at the Associated Press, I found out that Spanos was upset and/or he claimed his statements in the story were taken out of context. I also found out that Dean Spanos basically runs the team, not his father.

“The comments were far from out of context. In fact, I did a commentary about Spanos for my daily Westwood One Metro Source “Business of Sports” radio show on Tuesday where I speculated that Spanos could be eyeing Los Angeles. Metro Source put out Spanos’ voice comments nationally to thousands of radio stations around the country. Spanos knew I was a reporter no matter what the Chargers’ spin is.”

“And that is how the saga of the Chargers stadium and possible move to LA started. 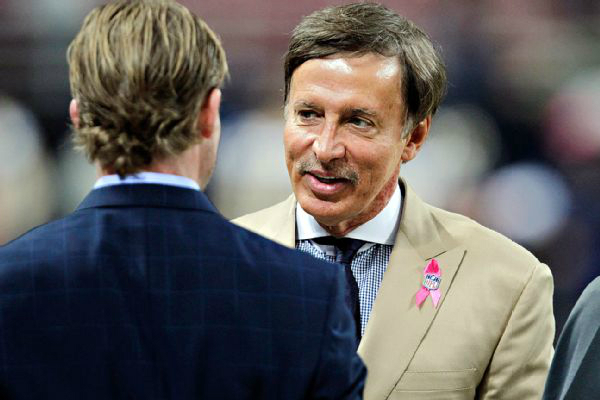 Los Angeles Rams owner and WalMrt’s Bud Walton’s son-in-law Stan Kroenke, may get a tenant in his new Inglewood, California stadium beginning in 2019.