The Tampa Bay Lightning and Columbus Blue Jackets are facing one more challenge than the rest of the teams in the pandemic-altered NHL playoffs.

Tampa Bay and Columbus will be back on the ice less than 48 hours after the Lightning outlasted the Blue Jackets with a five-overtime win in the fourth-longest game in league history.

“It was obviously a crazy game,” Tampa Bay defenseman Kevin Shattenkirk said. “Something that most of us have probably never been a part of before and it was great to come out on the right side of that.”

Game 2 on Thursday (3 p.m. EDT, NBC Sports Network) will come quickly for second-seeded Tampa Bay and seventh-seeded Columbus in their Eastern Conference series that opened with a game that needed six-plus hours to determine a winner.

“We’re going to be ready because I think we’re going to see the best version of the Columbus Blue Jackets at 3 o’clock,” Shattenkirk said.

Columbus coach John Tortorella, hoping to help his players bounce back, showed some mercy on Wednesday.

“We did have a practice scheduled,” Tortorella said. “We’d like to move the blood a little bit before you play another game, but we cancelled that.”

With a hard-driving coach, the Blue Jackets shrugged when asked repeatedly about how taxing it was physically and mentally to play so long.

“We would not like to play that many periods, but we’re fully capable of handling that load and don’t feel any worse for the wear right now,” Blue Jackets forward Nick Foligno insisted. “We’re excited about the opportunity after a tough one. We’re a team that always seems to put things behind us.”

Twenty years ago, Brian Boucher was the Philadelphia Flyers’ goaltender when they beat Pittsburgh in the longest playoff game in modern NHL history, a five-overtime thriller.

Boucher was between the benches on Tuesday night for NBC Sports’ television broadcast when Brayden Point scored and lifted the Lightning to 3-2 win 10:27 into the fifth overtime.

Point got the puck past Joonas Korpisalo after the goaltender made an NHL-record 85 saves and Blue Jackets teammate Seth Jones had a league-record NHL-record for a skater with 65 minutes, six seconds of ice time.

“You got that far, you want to win it, right? It’s a punch in the gut if you don’t get the victory,” Boucher said in a telephone interview. “But having said that, I think it would’ve been more damaging for Tampa to lose that game just because of what happened last year.”

The Lightning and Blue Jackets are matched up in the first round for the second straight year, giving Tampa Bay a shot at redemption. Columbus became the first No. 8 seed to eliminate the winner of the Presidents’ Trophy in four games, sending the Lightning home in 2019.

Also in the Eastern Conference playoffs, fourth-seeded Boston and fifth-seeded Carolina will have a quick turnaround after also needing multiple overtimes to decide a series-opening game.

The Bruins and Hurricanes will face off Thursday night (8 p.m. NBCSN) — about 30 hours after Patrice Bergeron scored in in double overtime to lift Boston to a 4-3 win. Game 1 was postponed 15 hours to a late-morning start because Tampa Bay and Columbus were playing on the same sheet of ice at Toronto’s Scotiabank Arena.

The Golden Knights pulled away to beat the Blackhawks 4-1 in Game 1, allowing just 20 shots to get to goaltender Robin Lehner against one of his former teams. The Flames opened their series with a 3-2 victory against the Stars after Dillon Dube scored twice in the first period and Rasmus Andersson scored the go-ahead goal in the second period. 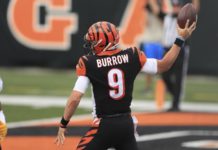 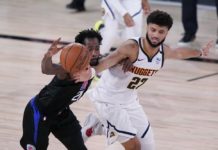 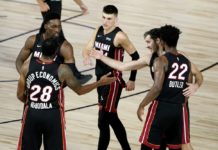